Altair (アルタイル, Arutairu?), also known as Altairs, is a recurring weapon in the series. It is generally a low-ranked gun with no special abilities, oftentimes being the first gun available in the game.

Altair is the weakest gun, providing 6 Attack and 5% Critical. It can be bought for 500 gil at Rabanastre, Bhujerba, and Nalbina Fortress. It requires the Guns 1 license and 30 LP to use.

In the Zodiac versions, it now provides 6 Attack, 10 Evade, 50 CT, 5% critical rate, and requires the Guns 1 license for 30 LP. It can be bought in Rabanastre, Giza Plains - The Dry, and Barheim Passage for 400 gil, or found as a treasure in Garamsythe Waterway (East Waterway Control). It is initially equipped on Balthier. It can be equipped by the Machinist.

The Altairs are a Rank 5 weapon for Sazh Katzroy, obtained by using Perovskite as a catalyst material on Vega 42s. They have a minimum strength of 74 and a minimum magic of 84, and their Synthesis ability is Magic Defense. At their maximum level of 61, they provide 380 strength and 390 magic. Leveling them to 61 requires a total of 449,310 exp.

The Altair is a

Astrologians. It can be obtained from

The Sunken Temple of Qarn, either as a treasure, a drop from the boss Adjudicator, or a reward for completion of the duty.

The XII version of the Altair appears as a Rank 2 Gun. At max level it gives 38 attack and 89 Accuracy.

Guns are relatively novel weapons. These relics from another world are currently being analyzed and researched, and while small progress has been made to increase their practicality, they are yet to be safe enough to make them readily available to the public. Guns are believed to hold the potential to overtake the bow and arrow as better long range weapons, but an efficient way to manufacture them must be first established before this can take place. Research facilities are currently naming these weapons after stars from another world.

Altair is a Gun obtained by buying it for 480 gil at Royal Capital Grandshelt, Industrial City Dilmagia, Karvell Resort Town, and Town of Desolation Visectrum, by crafting it using 96 gil, x3 Fire Crysts, x5 Iron Ores, and x1 Lumber, and as the reward for completing the quest For Members Only. It provides 20 ATK. 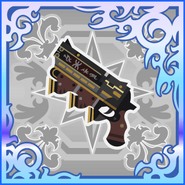 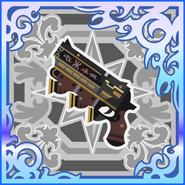 This gallery is incomplete and requires Dissidia 012 Final Fantasy added. You can help the Final Fantasy Wiki by uploading images.