Template:Enemy The Alraune King is a plant/mandragora-type boss in Final Fantasy XII fought in the Sochen Cave Palace, and later a regular enemy found in the Feywood.

The mandragoras will run away constantly: In Sochen Cave Palace they run to the corners of the area, and in Feywood will run to different Shrines of the Lost. The player must be more careful in Feywood and pursue them faster, as Alraune King is one of the few enemies in the game that can reach a level of up to 99. At this level, all physical attacks will be nullified (excluding guns), and only magick attacks can hurt it. They change level when they spend too much time away from the party, when they use the technick Mystery Waltz. One can see from afar a blue aura surrounding the enemies, and it increases about ten levels whenever they use it. 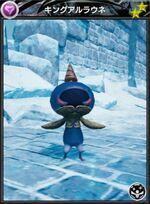 Retrieved from "https://finalfantasy.fandom.com/wiki/Alraune_King?oldid=2602722"
Community content is available under CC-BY-SA unless otherwise noted.