Non-player character
Alpha is a chocobo from Final Fantasy XIV. He resembles the chocobos depicted in the Chocobo series, and especially its titular Chocobo.

Alpha was created by Omega, who based his design on a being from another world. Omega used him to lure potential test subjects into the Interdimensional Rift, which wound up including the Warrior of Light and the Garlond Ironworks team.

Alpha joined the Ironworks team, and assisted the Warrior of Light during Omega's trials with his unusual powers. Even after learning of his origins and being dismissed by Omega, Alpha refused to abandon his new friends, saving Cid and the Warrior of Light when Omega left them to die. After Omega's defeat, Alpha was given leave by Cid to explore Eorzea. Accompanied by a miniature model of Omega, Alpha can then be seen at various places throughout the world having adventures.

Alpha and the miniature Omega accompanied Garlond Ironworks to Sharlayan to help finalize the Ragnarok, a starship that could bring the Warrior of Light and Scions of the Seventh Dawn to the edge of the universe.

Alpha resembles a chocobo, albeit one that is far smaller than the ones found naturally in Eorzea, with a proportionally larger head and eyes. While his "deformed" appearance is considered strange, many characters find him cute, including Jessie, who planned to market toys based on his likeness. Later, after joining the Garlond Ironworks team, he is given a customized version of the Ironworks uniform to wear. He has in his possession a number of magical cards, which can produce a variety of effects when he uses them.

Alpha appears as a DLC Buddy to be used in the dungeons. 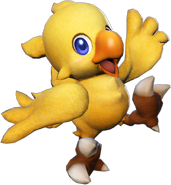 Alpha in Rise of a New Sun artwork.

[view · edit · purge]Alpha is the first letter of the Greek alphabet. It was derived from the Phoenician letter "aleph", and it is the source of the Latin and Cyrillic letter "A". In English, alpha is a noun that means "beginning" or "first (in a series)".