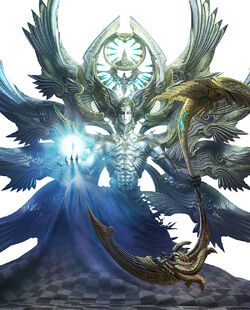 Since "Almighty Bhunivelze" is mostly a collection of the trilogy's tracks' reprisal, lyrics from several tracks appear in this composition. The song is in Latin and the added lyrics praise Bhunivelze. The added lyrics to this song have not yet been made public, but several versions have been compiled by fans.

In contrast with "Divine Love" which plays with softer tunes and comparatively quieter and slower chants to symbolize Bhunivelze's "benevolence", Almighty Bhunivelze employs deeper and louder sounds along with more frequent, faster and energized chants, with a far more serious and terrifying undertone, to symbolize Bhunivelze's wrath at being defied by Lightning. "The Ark" portion plays in a disjointed fashion, foreshadowing how Hope's soul ended up weakening Bhunivelze due to it forcing the latter to experience emotions for the first time.

The soundtrack length of "Almighty Bhunivelze" being approximately 13 minutes is likely an allusion to the Final Fantasy XIII trilogy, which makes several allusions to the number 13.