To live in an age so wondrous is a blessing—but to live in Ivalice, even more one.

Alma Beoulve is the younger sister of Ramza Beoulve and a member of House Beoulve in Final Fantasy Tactics. Unlike the two eldest Beoulve children, who are half-brothers of Ramza and Alma, she is Ramza's full sister.

Alma has a long blond hair tied in a low ponytail adorned with a pink ribbon. She has brown eyes to match her brother Ramza's. She wears an orange long sleeve v-neck shirt with a white turtleneck underneath, a long pink skirt with orange triangle linings at the edge of her skirt and brown boots. She also gains a long brown shoal to cover her shoulders.

Like her brother, Ramza, Alma is headstrong, cheerful, and bright, willing to risk her life in battle for his sake. Alma readily befriends people across the class boundaries, being friends with Delita Heiral's sister Tietra. She is an acquaintance of Princess Ovelia Atkascha from their time at Orbonne Monastery under Simon Penn-Lachish's tutelage.

Forgive me, I shouldn't have said anything. I'm sure you have worries enough of your own. Tietra will be all right. I'm here to look after her.

Alma apologizing to Ramza about Tietra being bullied

Alma lives at Eagrose Castle, stronghold of the Order of the Northern Sky and House Beoulve. Their father, Barbaneth Beoulve, brought the Heiral siblings Delita and Tietra under his protection. Tietra and Alma are about the same age, so they befriended despite the class difference. Dycedarg, the eldest of Barbaneth's children, secretly poisoned Barbaneth, and together with Duke Larg began a campaign against the primarily peasant Corpse Brigade.

During this campaign a Corpse Brigade leader named Gragoroth attempts to assassinate Dycedarg, but when he fails he tries to seize Alma. The second oldest Beoulve sibling, Zalbaag, intervenes, and Gragoroth instead seizes Tietra. Because of the knight cadet Argath Thadalfus's contempt toward peasants, Tietra is killed during the Battle of Ziekden Fortress led by Zalbaag and Argath.

You must run, Ramza! Quickly!

Following the Lucavi demon Cúchulainn's death, Ramza visits his brother Zalbaag in the Royal City of Lesalia in a vain attempt to have him stop the war. Alma is also at Lesalia, and she meets Ramza as he is leaving the town by the back gate. After Ramza tells her about their elder brother Dycedarg's motives to kidnap Princess Ovelia and Tietra's death, she cries and quickly decides to go with him as Ramza angrily refuses. Alma tells him that she does not want to meet the same fate as Tietra and it was the reason she decides to go with him.

As the siblings continue their argument, the Church of Glabados heresy examiner Zalmour Lucianada arrives and attempts to arrest Ramza for his supposed hand in Cardinal Alphonse Delacroix's death, but Alma tells her brother to run and helps him fight back, forcing Zalmour to leave empty-handed. Alma suggests they search for the Virgo auracite at the Orbonne Monastery—which the church's Knights Templar are after—as she had seen the stone there before, though she had not realized its significance at the time. Ramza reluctantly agrees to take her with him.

At the monastery, Ramza discovers that temple knight Isilud Tengille has beaten them. Ramza leaves the auracites he had collected with Alma, and rushes down to confront Isilud. Wiegraf Folles, the former Corpse Brigade leader who now works for the temple knights, captures Alma, and when Ramza and Isilud return to the entrance, Wiegraf has Isilud take Alma away while he battles Ramza. Ramza defeats Wiegraf, but cannot catch Isilud who had mounted a chocobo.

In the hands of the Lucavi[]

Isilud does not get far with Alma before he is captured by Marach Galthena working for Grand Duke Gerrith Barrington. Both Isilud and Alma are imprisoned at Riovanes Castle, and when Isilud's father, Folmarv, arrives with Wiegraf, Isilud is brought before him by Marach. Negotiations between Folmarv and Barrington go sour and Folmarv transforms into the Lucavi demon Hashmal, going on a rampage. In the chaos Alma slips out of the dungeon and comes across Belias's dead body, as Ramza, entering the castle to rescue Alma, had just slain the demon that had possessed Wiegraf. Continuing into the next room, she finds Isilud mortally wounded.

Isilud warns her that a monster is on the loose, and Alma, mistakenly believing he means Belias, tells Isilud Ramza has killed the monster. Isilud dies and Folmarv, back in his human form, enters, discovering Alma. By now the Virgo Stone is in Folmarv's hands, and it reacts to Alma's presence, alerting him to Alma being a suitable host for Ultima, the Angel of Blood and the leader of the Lucavi. Folmarv knocks Alma out and makes off with her.

When Folmarv learns how to reach the Necrohol of Mullonde he takes Alma there and attempts to perform the ritual that would resurrect Ultima. This fails since an insufficient amount of bloodshed has occurred since Ultima's death. Ramza arrives to rescue his sister and Folmarv decides to use him as a sacrifice to complete the ritual. Activating the Leo Stone, he transforms into the Lucavi beast Hashmal. Ramza tries to awaken the unconscious Alma, but Hashmal has sealed her soul.

Ramza proves too strong for Hashmal to destroy, and wounds him enough to break his power over Alma who wakes up. Hashmal refuses to admit defeat and commits suicide to offer himself as a sacrifice to Ultima. The Virgo Stone triggers and Alma finds herself possessed by Saint Ajora Glabados, Ultima's previous host.

Alma's will is too strong for Ajora, and she separates from him, reappearing nearby. Alma tells Ramza that they must kill Ajora, but the fake saint transforms into Ultima. Alma helps Ramza by casting Aegis on him. Ultima transforms into a giant skeletal monstrosity, but Ramza prevails. Ultima explodes and the area is consumed by the blast. It appears as though everyone was killed, but Alma is later glimpsed by Orran Durai, riding away with Ramza.

The director of Final Fantasy Tactics, Yasumi Matsuno, has confirmed that Ramza and Alma survived and went on to have another adventure in a different country.[1]

Alma is a guest character twice: the first time at Royal City of Lesalia, and the last time during the final battle. At Lesalia, she starts at level 3 with 39 Bravery and 87 Faith, and comes equipped with the Healing Staff, Barrette, Wizard Clothing, and Red Shoes. She comes with the Holy Magicks and Item commands as well as other randomly assigned abilities.

During both of these battles, Alma will stick close to Ramza and do her best to support him.

Alma does not participate in any other battles until the final battle, so taking her equipment after the first battle is a good idea, considering the rarity of the Healing Staff in particular. In the final battle she is level 56 and equipped with the Healing Staff, Ribbon, Luminous Robe and Featherweave Cloak. She only comes with Holy Magicks and Faith Boost.

When fought in the fourteenth Rendezvous battle: Brave Story, she is level 99 and starts with 31 Bravery and 87 Faith. She comes equipped with a Mage's Staff, Barette, Gaia Gear, and Red Shoes. She has access to the Holy Magicks and Time Magicks commands, as well as the abilities Ignore Terrain, Soulbind and Arcane Defense.

Alma has appeared in the following games throughout the Final Fantasy series:

Alma has made key guest appearances in the following non-Final Fantasy media: 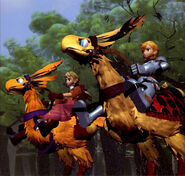 Ramza and Alma in the ending (PS).

Alma's grave, shown at the end of the game. 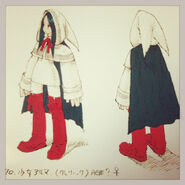 Alma as a White Mage before being made Ramza's sister. 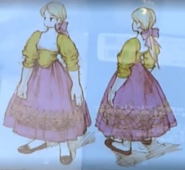 Concept art shown in a livestream in May 2018 that appears to be an early design for Alma.