Alkaid is a weapon for Auron, obtainable when the dominant abilities on any katana are Triple Overdrive and Overdrive → AP.

Hagun is a 2-handed Katana equippable by Samurai at level 72. It has a damage of 75 and a delay of 450. It also has the special property "TP Bonus"; this means that all weapon skills performed with the weapon are treated as if the user's Tactical Points were 1000 higher than they actually are. This won't allow a player to use a weapon skill with insufficient TP, nor can it increase the strength of a weapon skill beyond the normal 3000 TP maximum. It is typically used by players with weapon skills whose damage is heavily modified by TP such as Tachi: Gekko. Hagun is obtained from the Empty Notorious Monster Battlefield "Sheep In Antlion's Clothing" located in the Boneyard Gully. 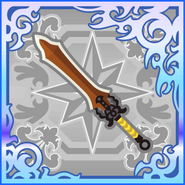 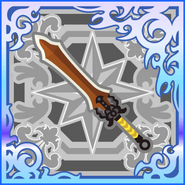 [view · edit · purge]Alkaid is the traditional name of Eta Ursae Majoris of the star in the constellation Ursa Major. Within samurai culture, Myoken is a bodhisavva who is synonymous of the Big Dipper, being a deity of warriors, fortune, and fate. The Big Dipper within traditional Asian astronomy is related to earthly mortality and celestial palace of the heavens, and Alkaid especially is known as the "Sword" or the "Breaking Military Star", being related to Myoken. Hence, its northern direction is ominous to face and point weaponry at, especially for warriors and martial-related professions.