Keiichi Sonobe
Alhanalem is a playable Yuke magician from Final Fantasy Crystal Chronicles: Ring of Fates. He is close friends with Meeth Crym, the twins Yuri and Chelinka, and their father Latov.

Prior to the twins' birth, Alhanalem served under King Kolka alongside Meeth, Latov, and Aleria. He, Meeth, and Aleria were in charge of instructing young mages in the art of using crystals, of course that was until one of their students, Princess Tilika, had been captured by the Lunite agent Cu Chaspel and had selflessly sacrificed herself in order to save Sir Latov and Lady Aleria. Feeling guilt over her loss, Al, Meeth, Latov, and Aleria left the service of the king and settled down in a small village. 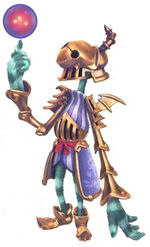 Sometime after, Latov and Aleria were wed and soon enough, Aleria gave birth to the twins Yuri and Chelinka and Al became very ecstatic. Sadly, the joy was short lived as Cu Chaspel arrived on a stormy night to take the children away, but in act of desperation Aleria sacrificed her freedom in exchange for her children. As the years passed, the sadness Al held had been healed by the children's kind hearts and the children grew very close to him. He acted as a guardian of sorts to them, even teaching Chelinka about crystals after he realized the potential she possessed. He also took the children on a few of his expeditions to search for useful magical items.

Despite the many years of joy that he spent alongside the twins, it all soon came to an end when Cu Chaspel returned once again to take Chelinka away, but thanks to the efforts of Sir Latov and Chelinka's Starsinger power they were able to prevent Chaspel from committing the act, but sadly at the cost of Chelinka's consciousness and her father's life. Sometime after or before the event Cu Chaspel had imprisoned Al inside a Red Crystal at the peak of Mount Vaal, were he remained for many years. Yuri, unable to leave his unconscious sister's side, was forced to stay by her side and was unable to help his dear friend, but after several years, Chelinka finally awoke and she and Yuri set out to Mount Vaal to save him.

After braving the dangers of Mount Vaal and reaching the top, Yuri and Chelinka find that Alhanalem was encased in a red crystal. They break the crystal and Al, seemingly "controlled" attacked Yuri. After Yuri battle Al, he frees him. Alhanalem then agrees to travel alongside the twins.

Alhanalem, Yuri, and Chelinka travel to Rebena Te Ra, where Alhanalem reveals to the castle guards and the twins that he was once a royal mage in the King's service. However, he is told by the guards that Alhanalem is already in the castle, and that the real Alhanalem is an impostor. The three are unable to convince the guards otherwise, so they look for other ways to get into the castle.

The three overhear a pronouncement from the King about the dangers of Abyssus Forest. Yuri and Chelinka, against Al's warning, decide they should travel into the forest and gain information that would allow entry to the castle. When the party meets Gnash, Alhanalem heals him of this poison, prompting Gnash to join the party.

After clearing the forest of monsters, the party returns to Rebena Te Ra and convince the guards to let them in. They discover the king does not remember Alhanalem at all, and retreats to his quarters. Alhanalem then confronts his impostor, who challenges him to bring proof of his identity.

The party then travels to Rela Cyel. Alhanalem warns the rest of the party that the rain may cause the structure to collapse, words that are proven true shortly after meeting up with Meeth. In the Crystal Shaft, Alhanalem tells the story of he and Latov's evacuation of Rela Cyel. 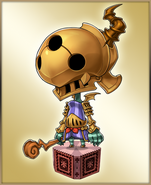 Alhanalem in the opening movie.