Cid Pollendina: Oh, shut up and help me remodel the Alexander (Final Fantasy XIV) page!
Please expand this article into a full one. The following tasks need to be completed:This request can be discussed on the associated discussion page. Remove this notice upon completion.

Since the Sharlayan exodus, a structure has stood steady against the flow of the Thaliak River. Now, the Illuminati have summoned a primal around this rusting ruin─a terrible colossus of steam and metal. Steel screamed against steel when it rose from the waters, and it drank deep of the land's aether before grinding again to a halt. The voices of Idyllshire cry out, asking for aid ere their homes are crushed under the weight of iron. You must lead a band of valiant adventurers into the machina and discover how to destroy the core─lest the giant screeches again to life, and bleeds all the realm dry.

Alexander is a primal and a location from Final Fantasy XIV, made its debut in the Final Fantasy XIV: Heavensward expansion. It's an enormous, long-abandoned mechanical fortress into which the Goblins have summoned a primal essence. Unlike the other primals the adventurers must fight directly, Alexander needs to be defeated from within.

Ages ago, Alexander was designed by the author of the Enigma Codex be a haven for scientists and philosophers to research the mysteries of life. Two years after the start of the Seventh Umbral Era, a group of Au Ra, including Mide and Dayan, attempted to summon Alexander using the Enigma Codex. While Alexander was successfully summoned beneath the Thaliak River, a second version of Alexander also arrived from the future. Illuminati goblins aboard the future Alexander shot and killed most of the researchers, and Alexander began to absorb aether into himself from the surrounding land. When it attempted to draw Mide into itself, Dayan shoved her out of the way and was pulled in himself. As the last survivor, Mide executed their backup plan and conjured a barrier around Alexander. Though the Enigma Codex exploded, the future Alexander returned to its own time the barrier kept the Alexander of the present from awakening. Some time later, the Illuminati leader Quickthinx Allthoughts learned of Alexander's location in Thaliak River in the Dravanian Hinterlands and repurposed it by infusing the structure's core, the Gordian Knot, with aether so that it would serve as a primal.

Shortly after Ishgard join the Eorzean Alliance, the Illuminati successfully awaken Alexander. Cid nan Garlond and Y'shtola, the former knowing the Illuminati were the cause, witness Alexander partially emerging from the Thaliak River and entering stand-by mode while siphoning the area's aether. While Y'shtola seeks the aid of Matoya to contain it from draining aether, Garlond Ironworks secure the area around Alexander while investigating the apparent opening in Alexander's exposed hand with the assistance of Mide, who is after the Enigma Codex. After braving Alexander's defenses, the group shuts down the Gordian Knot. However, the Illuminati do not appear to be deterred at all by this, suggesting they have something up their sleeve.

Some time later, Roundrox entrusts Mide with her "treasure", the final missing piece of the Enigma Codex. Shortly after this event, Alexander stirs again, with its second arm emerging from the lake. While Cid and Y'shtola leave to consult with Matoya, the Adventurer makes plans with Biggs and Wedge to breach this arm, known as "Midas", and shut down Alexander's second core, the Midian Knot. However, they are soon confronted by Quickthinx Allthoughts, who claims that Mide has been working with the Illuminati from the beginning.

When the group confronts Mide with this accusation, she admits that it is partially true. She reveals that the initial attempted summoning of Alexander several years ago was not the work of the Goblins, but actually done by a group of Au Ra that she belonged to. However, the ritual went awry; the entire group besides herself was killed, and their leader—Mide's lover, Dayan—was absorbed by the Primal's core. After this disaster, she was the one that told the Illuminati about Alexander, hoping that if they succeeded in summoning the primal, she would be able to see Dayan once more. However, she now regrets these actions and wants nothing more than to stop the Illuminati's plans.

Just as Mide finishes her story, the group gets word that the Illuminati has captured Roundrox, having learned that she is capable of controlling the Enigma Codex, and by extension, Alexander itself. The Adventurer, Mide, Biggs and Wedge set off to breach Midas' defenses in order to shut down its core and rescue Roundrox. They succeed in getting past the Illuminati's guardians, including a powerful robot known as Brute Justice, and disable the Midian Knot. However, when confronted by the Illuminati, they are not only unable to rescue Roundrox, but end up losing their piece of the Enigma Codex when Quickthinx is able to accurately predict seemingly random events. Once they escape Alexander, they are greeted with confusion by their Goblin allies, who claim that they were only gone for a few minutes.

While discussing the possible explanation of both Quickthinx's ability to predict the future and the way that time seems to have slowed down while they were inside Midas, the group comes to the realization that Alexander has the power to manipulate time itself. This is confirmed once the group is rejoined by Cid and Y'shtola, who reveal that Alexander is currently reversing time to undo the damage the Adventurer's group caused to it, and restore the two disabled cores. Once this is finished, and with both the completed Enigma Codex and Roundrox in their possession, the Illuminati will have the power to rewrite history, creating a so-called perfect world that they control. While they talk, they are joined by what appears to be Quickthinx Allthoughts' coeurl kitten, Shanoa, which indicates it wants to help them. Curiously, they observe Shanoa with Quickthinx at the same time.

Knowing that their only hope to shut down Alexander is to rescue Roundrox, Biggs shuts down the barrier around Alexander while Cid uses the Enterprise to deposit the Warrior of Light at Alexander's head. With the barrier down the giant immediately awakens and fully rises from the river, but the barrier is restored before it can begin draining the land of Aether. The band storms Alexander's control room and dispatches the Illuminati guards. When Mide remarks that she was hoping to see Dayan again, Roundrox uses the Enigma Codex to travel three years back in time to when Mide and Dayan attempted to summon Alexander. Their arrival directly causes their summoning attempt to fail, as the Illuminati shoot Mide and Dayan's companions. Meanwhile, Shanoa jumps at their goblin companion, who had been chronicling events surrounding Alexander, and both she and his book tumble to the ground as Alexander returns to the present without them. The group takes Roundrox and escapes as Quickthinx Allthoughts arrives, but Mide stays; realizing that Dayan was always meant to die, and that her efforts to see him again caused it, she wishes to remain with her lover's soul.

After regrouping, they return to Alexander's massive aethercyte core with the intention of shutting it down, but Y'shtola Rhul remarks that it has grown so large that it is absorbing Aether faster than they could destroy it; the only means of halting Alexander would be to use the Enigma Codex in the now heavily-guarded control room. Quickthinx returns and gloats that the future cannot be changed and the Illuminati will be victorious, but Shanoa leaps at him and causes him to drop his "futurebook"; the band realizes that he has simply been reading from Backrix's tome, lost in the past, and that the future is not set in stone.

As they make their plans to shut down the core, Quickthinx engages Alexander and halts time around the core before summoning Alexander Prime to destroy them while they are frozen. Time unexpectedly restarts just before it fires, and Cid, Biggs, Wedge, and they are able to leap free as Alexander Prime disappears into a time distortion. The Warrior of Light enters the time distortion and does battle with Alexander Prime. During the battle, it sends several smaller units through time portals; the Warrior of Light follows and destroys them, which shuts down Quickthinx's temporal field and saves their own lives in the past.

Once Alexander Prime is destroyed, they return to the control room and Roundrox attempts to use the Enigma Codex to shut down Alexander. However, Quickthinx Allthoughts reveals that he too can access the Codex before Mide arrives and shoots him in the head. Roundrox disables the core, but Quickthinx revives and reactivates it, having replacing much of his body with machinery. Quickthinx commands Alexander to unleash its divine judgment on the ignorant and unworthy, but the Enigma Codex instead destroys Quickthinx before self-destructing. As Alexander grinds to a halt, the monitors in the control room flicker to life and Mide realizes that Dayan's soul really does survive within. Without the Codex to regulate the core, it begins absorbing Aether at an accelerated rate; Mide throws herself into the core so that her soul can be with Dayan, and together they freeze Alexander forever within a single moment in time as their companions escape.

Deep within the heart of Alexander, Mide is reunited with Dayan. He explains that Alexander foresaw all the infinite possible futures, and concluded that its own existence would inevitably bleed the entire land dry of Aether, causing the end of the world. It therefore intervened with history only once: to send a servant in the form of a clockwork coeurl to gently nudge history into a path that would ensure its own ending. Though they are now trapped forever within a single moment of time, Mide expresses happiness at being able to be with Dayan forever. 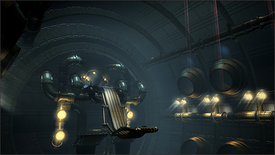 The right arm of Alexander, which upon emerging from the Tipped Ewer grasped a nearby riverbank on the edge of the Maker's Quarter. The immense hand emerged through the force field surrounding Alexander, allowing entry through a portal in the "fist" of the machine arm. 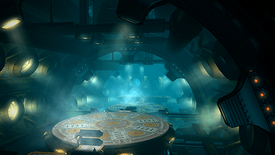 The left arm of Alexander, which grasped onto a delta in the Thaliak River. Though structurally mirroring the Gordias sector, its internal contents noticeably differ. 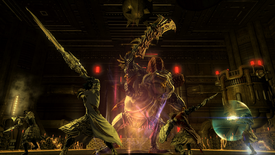 The central body of Alexander.

"Sins of the Father, Sins of the Son" is the ambient theme inside Alexander.

"Locus" is the theme that plays during boss battles.