Leader of the Tenshodo

Twenty years prior to the game, Aldo came to Tavnazia alongside his older sister Emeline. However, by nightfall, Tavnazia was overrun by Orcs with the defenders outmatched and outnumbered. Aldo was among citizens of the town to flee the battleground, also ending up one of the few survivors while his sister appeared to have died getting him to safety. Sometime after, Aldo gained Verena as an adopted sister.

As head of the Tenshodo in Jeuno, Aldo appears frequently in storylines as he is suspicious of the Archduke of Jeuno, especially after Verena disappears. He appears in Chains of Promathia to aid Prishe after she is stranded far from Tavnazia by a Battle Airship. Though he and Prishe have no prior association, Prishe demands his help in the name of his dead father—whose help in returning her home she had originally hoped to secure.

A mysterious child calling himself Aldo appears in Port Jeuno alongside a giant crystal that is captivating others with ancient song of legend. Only Aldo, along with Verena and the adventurer, was able to remember what had just happened because the crystal Young Aldo is actually his biological nephew. Aldo then learns that Emeline ended up living in Selbina under the name Mathilde due to the amnesia caused from being attacked by the Orcs. Though the reunion is cut short, Aldo is given closure with his past and is content with knowing that his sister is alive and well somewhere in Vana'diel with her son. 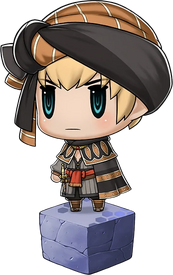 Aldo as he appears in the Opening FMV.

A young Aldo and his sister Emeline as they appear in the opening FMV.