The Aldean Sea, or Aldi Sea, is a location from the original Final Fantasy. It is a huge body of water surrounded by land, bordering on Cornelia, Pravoka, and Elfheim. The only exit from the Aldean Sea is initially blocked by the land bridge until the Warriors of Light provide Nerrick with the explosives he needs to blow up the bridge.

The majority of the enemies in the Aldean sea are associated with the Water element and are thus weak to Lightning. In addition, the entire ocean of the Final Fantasy world contains exactly the same enemies as the inland sea does. 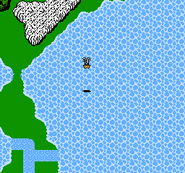