Calm Lands (during Chapters 2, 3, 5, or after mission to clear Calm Lands Ruins of fiends is complete)

Combine items and master their use.

The Alchemist is a dressphere in Final Fantasy X-2 and Final Fantasy X-2: Last Mission. It is obtained in the Calm Lands in Chapters 2, 3, or 5 after completing the mission to clear out the Calm Lands Ruins' fiends. They wield high-tech guns, which can be powerful at higher levels. The job has low Defense and low HP, but is expert at using items for various effects.

The Alchemist dons heavy armor and big boots, and has a similar clothing style to the Al Bhed.

Yuna wears a skin-tight red outfit with yellow armor strapped with brown belt on top and brown goggles on her head. Her sleeves are blue with yellow straps and large yellow shoulder pads. She wears blue and yellow knee-high boots. Her "half-skirt" is blue, yellow and red.

Rikku wears a yellow and teal skin-tight outfit with dark orange armor strapped with black belts on top and teal goggles on her head. She has large blue and scarlet shoulder pads. She wears knee-high orange boots. Her "half-skirt" is scarlet and teal. The outfit is similar to her dive suit from Final Fantasy X.

Paine wears a skin-tight tan, purple and blue outfit with orange straps and brown goggles on her head. She has a black shrug with brown sleeves over her shoulder and large black and orange shoulder pads. She wears knee-high orange and blue boots. 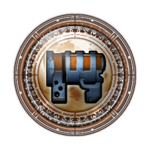 Mastering Alchemist requires 2,249 Ability Points. Alchemist abilities cannot be used outside of this dressphere. In addition to Mix, Alchemists can use items without consuming stock via the Stash skillset. Stash has a longer charge time than the Item command, but once a Stash ability has been learned, the party member can use items through it in an infinite supply. Elixir from this skillset takes a whopping 999 AP to learn.

All items usable in battle can be mixed with Alchemist's Mix. There are a total of 4624 possible combinations with 53 outcomes. The Alchemist's Mix can be used at any time.

Their support abilities enhance the effect of items and reduce charge time.

Multiple copies can be found on the ground inside the tower or bought in shops. It increases Magic, Magic Defense and Accuracy by 1 point per each level. It has a low HP growth. Alchemist allows the player to remove status effects from items consistently. Its regular attack range is three tiles ahead of the character.

Yuna as an Alchemist.

Rikku as an Alchemist.

Paine as an Alchemist. 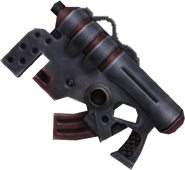 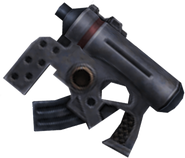 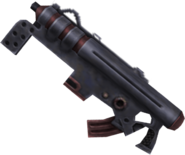 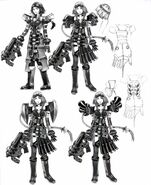 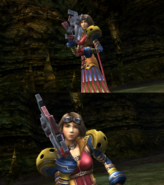 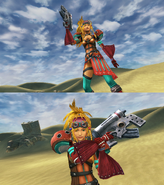 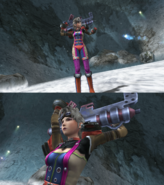