World of Balance:
World of Ruin:
Albrook, is a town in Final Fantasy VI. It is a port city, and after Vector, is the city most closely connected to the Gestahlian Empire.

Due to Albrook being the largest port on the Southern Continent, it was one of the first cities conquered by the Empire. When the player visits Albrook for the first time, the pub is always full of off-duty Imperial soldiers, and the streets are patrolled by troops in Magitek Armor.

The Blackjack lands at Albrook when Setzer ferries the party to the south to invade the Magitek Research Facility. After the banquet with Gestahl, Terra and Locke come to Albrook to board a Magitek Armor transport ship to Thamasa under the command of General Leo. They are accompanied by Shadow and Celes.

The Floating Continent hovers above Albrook once it becomes airborne, blanketing the city in shadow.

After leaving the Solitary Island in the World of Ruin, Celes washes ashore not far from Albrook. The townsfolk tell her much of what has happened in the past year, including Kefka's rise to power, and a man with a similar sparkle in his eyes to her, who headed north to Tzen to look for his friends.

Albrook is constructed at least partially over a river or the edge of the ocean, with much of the city actually being on top of a large balcony that spans the water. The Weapon and Armor shops are down on the lower part of town by the waterfront, and the Relic shop, Pub, and Inn are on the elevated portion. The Pub and Inn occupy the same large building spanning the top area, and in the World of Balance is full of Imperial troopers spending time with the dancing girls and playing rambunctious music; in the World of Ruin however, the Pub is entirely empty. Sound of the Relic shop and Inn is an entrance to the pier, but until after the Imperial banquet it is blocked of by an Imperial trooper in Magitek Armor who will not allow anyone to pass.

There is a Hi-Potion in the barrel outside the Inn, and a Teleport Stone in a crate near the entrance to the ship dock. Inside a pot in the Weapon shop is Ether, and there is an Elixir in a clock in the joint Pub and Relic shop.

After the Imperial banquet, the player will be in control of a party of Terra and Locke and have the objective to go to Albrook and meet up with General Leo. Leo can be found on the docked ship and will announce that Celes and Shadow are accompanying them on the expedition - if the player has not encountered Shadow previously, he will be named here. Leo will inform the party they depart the next day and he has arranged lodgings for them, go to the Inn and rest to advance the scene.

In the morning, return to Leo and tell him you are prepared to set out. 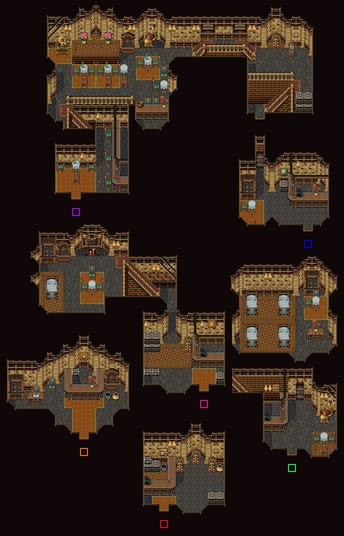 "From that Day On..." from Final Fantasy VI

"Under Martial Law" is Albrook's World of Balance background theme, and is replaced by "From that Day On..." in the World of Ruin.

There is an unseeable event when the party boards the ship to speak to General Leo, where if Gau is in the party, he will leave, and Locke and Terra will remark on his reluctance to travel by ship and decide to leave him behind. Presumably, this event exists just in case the player has Gau in their party, which could be possible if the player had him Leap on the Veldt and then put off regaining him until after the Imperial Banquet. However, as there is no way to get to the Veldt at this time, this loophole is impossible.

In an annotated draft map of the World of Ruin, Albrook (whose Japanese name may more accurately be translated "Alburg") is labeled アルソルグ (Arusorugu?) (roughly read "Alsorg").[1] 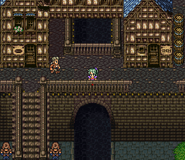 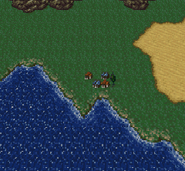 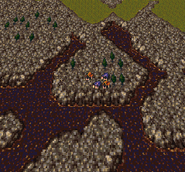 Albrook in the World of Ruin (SNES).

Albrook in the World of Ruin (SNES).

Albrook on the World of Balance map (2014 mobile/Steam).

Albrook in the World of Balance (2014 mobile/Steam).