The Ala Mhigan Quarter 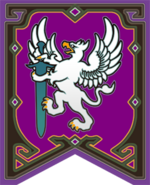 Ala Mhigo is a city-state in Final Fantasy XIV located on the eastern corner of Aldenard in the region of Gyr Abania, along the salt lake of Loch Seid. The liberation of Ala Mhigo is a central focus of Final Fantasy XIV: Stormblood, with the siege of the city itself serving as the final dungeon of Patch 4.0. The majority of all Hyur Highlander clans lived within this city before the time of its fall.

An occupied city-state located in a mountainous region of eastern Aldenard. The nation was plunged into chaos twenty years ago when its masses rose up in rebellion against the tyranny of the mad king Theodoric. However, unbeknownst to many, it was none other than the Garlean Empire that had been pulling the strings from the shadows the entire time. They quickly set about moving in to take control of Ala Mhigo as anarchy reigned, and have remained in control of the nation for the past twenty years.

The highlands of Gyr Abania in the eastern reaches of Aldenard were once under the control of a martial nation known as Ala Mhigo. The historically conflicted nature of the territory forged the country into a significant military power.

Even as this aggressive nation sent its forces to conquer in the west, it repelled repeated invasion attempts from the east. In the Year 1557 of the Sixth Astral Era, it finally fell to the incursions of the Garlean Empire and became another imperial territory.

Though the people of Ala Mhigo once revered Rhalgr, the Destroyer, as their patron deity, any such religious observance has since been forbidden by the controlling authorities.

Founded in 1135 of the Sixth Astral Era by Anshelm Cotter, Ala Mhigo was a fortress city built along the shores of Loch Seld in Gyr Abania. The citadel guarded against invaders from Ilsabard and controlled trade between Eorzea and the Near East. Ala Mhigans came to be renowned for their fighting prowess, and with limited natural resources, their chief export would be mercenaries to the other city-states.

Roughly 80 years prior to the game, Ala Mhigan forces under King Manfred attempted to invade Gridania in a conflict known as the Autumn War, but were driven back by the combined might of Gridania, Ishgard, Ul'dah, and Limsa Lominsa. This resulted in bad blood between Ala Mhigo and her neighbors in the following decades.

Twenty years prior to the start of Final Fantasy XIV,[note 1] Ala Mhigo was embroiled in a civil war against the tyranny of Theodoric, the King of Ruin. The resulting instability led to invasion by Gaius van Baelsar and the XIVth Imperial Legion of Garlemald. Weakened by civil war, the largely Hyuran population of the city was defeated by Garlean invaders. Those who would not submit to imperial rule fled west and south, while those who remained either submitted to Garlean rule or formed the Ala Mhigan Resistance.

Ala Mhigo held onto its engineering talents. The fall of Ala Mhigo ushered a change across Eorzea, where the remaining four city-states organized a rough coalition.

Ala Mhigo was inaccessible in version 1.0.

While Ala Mhigo was not accessible, though substantial concept art for the city and its environs were included with the artbook that came with the collector's edition and related products, such as the Before Meteor commemorative soundtrack release.

Following Gaius's supposed death during Operation Archon, Zenos yae Galvus was appointed viceroy of Ala Mhigo. They began to return to focus during the "Soul Surrender" and "The Far Edge of Fate" patches, as the machinations of the Griffin would force the Eorzean Alliance into renewed military conflict with the empire after a false-flag operation on Baelsar's Wall.

Ala Mhigo is freed from imperial control after the death of Zenos yae Galvus. The people celebrate their victory by singing their nation's original anthem. The Scions of the Seventh Dawn work with the Resistance to rebuild Ala Mhigo, both its industry and government. With Lyse Hext and General Raubahn guiding the proceedings, the people abolish the old monarchy and decide to form a republic with elected officials modeled after Ishgard's House of Commons. Raubahn, having been released from Sultana Nanamo's service, becomes the leader of Ala Mhigo army. Nanamo and Lolorito collaborate in reestablishing the nation's industry, using the salvaged riches of King Theodoric to fund the relocation of the Ala Mhigan refugees and focus their efforts on the Saltry.

A council of the Eorzean Alliance is called in Ala Mhigo to formally welcome the newly freed nation with its sister nations, Lyse and General Raubahn acting as the de facto representatives and leaders. Ala Mhigo comes under threat of a massive Garlean invasion and the nation grants asylum to defecting Garleans of the Populares faction. Gathering allies from the Eorzean Alliance, as well as from Doma, the borders become a battlefield where the denizens of the Alliance and Doma battle for Ala Mhigo once again.

The battle intensifies as Elidibus (controlling the body of Zenos) enters the fray and defeats most of Eorzea's heroes, leaving the Warrior of Light to stand against the Ascian. The Warrior is left crippled after being "called" and the battle for Ala Mhigo itself reaches a stalemate with the Garleans being forced to retreat in the wake of dissenting rumors in Garlemald about Zenos being possessed. The Eorzean Alliance regain their footing and strengthen their forces, though sporadic battles on the border continue.

The battle in the Ghimlyt Dark would largely remain a stalemate due to the Warrior of Light and the majority of the Scions' leadership being in the First. Varis zos Galvus remains in Garlemald to conspire with Elidibus, but is killed by Zenos, who retrieves his body and to prevent his father from using Black Rose, causing the Empire to fall into chaos.

The VIIth Imperial Legion, thought to have been wholly defeated at Carteneau, resurfaces at Werlyt in an attempt to break the stalemate with the Alliance by deploying Ultima Weapon-based prototypes, among them the Ruby, Sapphire, and Emerald Weapons. Gaius, who had survived the Praetorium's destruction and defected from the Empire, informs the Warrior of Light and Raubahn of this development. The Warrior destroys the Ruby Weapon at Gaius's request, continuing the stalemate.

The Measure of Our Reach