Akademeia Deck (魔導院のカード, Madōin no Kādo?, lit. Magic Academy Cards) is a recurring weapon in the series. In Final Fantasy Type-0 a weapon model is shared among all weapons of the same kind so at first there was no unique design for the cards. Final Fantasy Airborne Brigade changes the dominant color from blue to crimson to differiate from Ace's other decks. In Dissidia Final Fantasy (2015) Akademeia Deck was given a new design that sports Dominion of Rubrum's emblem and national color and since this game this look is the most popular depiction of the cards. Another depiction has a stylized design of Etro's gate at the back. Akademeia deck is a signature weapon for Ace from Final Fantasy Type-0.

Akademeia Deck is an early weapon for Ace with an attack power of 8. In the PSP version, it can be bought from the SPP Post after bringing Ace in multiplayer once. It costs 1600 SPP and sells for 800 gil.

In the HD version, it can be bought after defeating 30 enemies with Ace. It costs 200 SPP and sells for 100 gil.

The Akademeia Deck is one of Ace's unlockable weapons. It can be obtained either by random chance when redeeming a Treasure token, or by purchasing them from the Shop for 7,200 Gil. Like all other characters' weapons, having it equipped carries no advantages or disadvantages.

The Akademeia Deck is a Rank 5 Throwing weapon that contains the Jackpot Shot Soul Break for Ace. At max level it has 93 Attack, 152 Magic, 71 Mind, and 95 Accuracy. 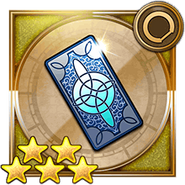 Akademeia is an alternate Latin transcription of the word "Ἑκαδήμεια", "Academia". [view · edit · purge]The word "Academia" comes from the academy in ancient Greece, which derives from the Athenian hero, Akademos.

The word academia designates the community of students and scholars engaged in higher education and research.