Aka Manah is an enemy in Final Fantasy X-2.

"An envoy of the Farplane that terrorizes all Spira. It can unleash consecutive elemental magic attacks as well as the mysterious Emblem of Thanatos."

M
Return to Nothing

It has the ability to cast powerful magic, so the player should use their strongest attacks and magic to defeat this fiend quickly. Holy-imbued attacks work particularly well.

Aka Manah is born with the following: Firaga, Cure and Absorb. It is 3 years old at this point. Like the Daeva, from which it has emerged, it has no life readings. It seems to phase between the Farplane and the world of the living. Shinra says he can feel the Spellspinner trying to communicating but either it is using an unknown language or is communicating with some "faraway world" from which it has come.

Aka Manah has high Magic, Magic Defense, and Accuracy, and mediocre Strength, Defense, and Agility. However, its Evasion and Luck are very low. It can learn Thanatos Emblem and Total Limit Break from Meteor.

At the conclusion of its fiend tale, Aka Manah dies again and is reborn as Aeshma. 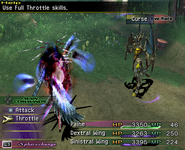 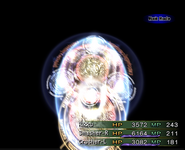 Emblem of Thanatos.
Add a photo to this gallery

[view · edit · purge]Aka Manah is the Avestan language name for the Zoroastrian daeva "Evil Mind", "Evil Purpose", "Evil Thinking" or "Evil Intention". Aka Manah is the demon of sensual desire sent by Ahriman to seduce the prophet Zarathustra. His eternal opponent is Vohu Manah. Aka Manah is the hypostatic abstraction of accusative akem manah (akәm manah), "manah made evil". The objectification of this malign influence is the demon Aka/Akem Manah, who appears in later texts as Middle Persian Akoman and New Persian Akvan.

Retrieved from "https://finalfantasy.fandom.com/wiki/Aka_Manah?oldid=3018717"
Community content is available under CC-BY-SA unless otherwise noted.