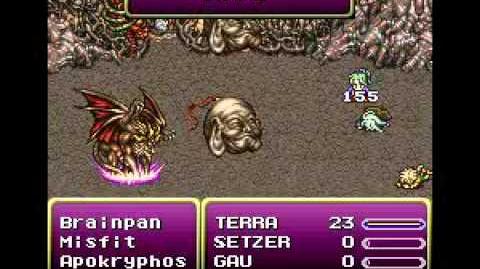 The airship glitch in Final Fantasy VI allows the player to use the Blackjack airship early, potentially as early as entering the overworld for the first time after leaving Narshe. It requires the player to play from whichever point they want to use the airship all the way to the Floating Continent without saving. It is known to work with the original SNES and Super Famicom versions, but may also be possible on the PlayStation and GBA ports.

The glitch is triggered by saving on the overworld at whatever point the player wants to access the airship, and then continuing as normal without saving. The player must cross the Floating Continent and return to the Blackjack, fly around without landing, then return to the Floating Continent and trigger a Game Over there. When the game resumes, the player returns to the point they last saved, except they will be on board the airship.[1]

Because the airship is acquired through glitching, its use comes with many limitations. The interior cannot be accessed, and the player can only land once before the airship becomes inaccessible, depending on when in the story the glitch is triggered. It's recommended to land near Zozo if one intends to complete the game, as it's close to where the player would first acquire the airship normally, and the furthest point in the story where the game can be completed using the glitch, as the airship becomes accessible again after Setzer is named. Because triggering the glitch requires the player to play through the entire World of Balance up to the Floating Continent without saving, it is impractical (but possible) to perform without using emulators and savestates.

The glitch can be used to cause numerous scripting errors, as skipping from Narshe to Zozo fails to trigger many in-game scripts with many interesting effects: