The Airship Graveyard (飛空艇の墓場 [ひくうていのはかば], Hikuutei no Hakaba?), also known as the Graveyard of Airships, is the site of the final battle in Final Fantasy Tactics. It is located in the Necrohol of Mullonde, accessible only by a portal within Orbonne Monastery.

After capturing Alma Beoulve and learning the location of the portal, Folmarv Tengille travels to the Graveyard in an attempt to resurrect the leader of the Lucavi, Ultima, using Alma as a host body. His initial efforts are in vain as not enough bloodshed has yet occurred since the original death of Ultima's human host, Saint Ajora Glabados.

However, Ramza Beoulve soon arrives in an effort to rescue his sister. Folmarv decides he must sacrifice Ramza to Ultima in order to successfully initiate the resurrection, and transforms into Hashmal, second-in-command of the Lucavi. While Hashmal proves a powerful opponent, Ramza prevails and the Lucavi Beast's spell on Alma to keep her asleep begins to fail.

Unwilling to accept failure even at the cost of his own life, Hashmal commits suicide, causing Saint Ajora to successfully resurrect. Alma, however, resists Ajora and manages to separate from him, reappearing nearby. In a rage, Ajora transforms into Ultima and attacks Ramza. After taking considerable damage, Ultima takes on an even more powerful form, yet even this is not enough. Ramza overwhelms Ultima, and the demon, in a last ditch effort to preserve her own life, ends up triggering a massive explosion which results in the destruction of the ship upon which the battle took place.

The Airship Graveyard appears a battle background in the Battle Music Sequence for "Ultima, the Perfect Body". 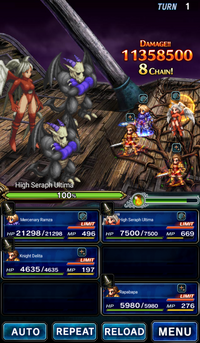 This section about a location in Final Fantasy Brave Exvius is empty or needs to be expanded. You can help the Final Fantasy Wiki by expanding it.
Final Fantasy Tactics setting
Community content is available under CC-BY-SA unless otherwise noted.
Advertisement