A large mobile weapons platform currently being developed by the Advanced Weaponry Division. Although still in prototype phase, it was rushed into action to aid in the public execution of Avalanche members.

Airbuster is a boss in Final Fantasy VII Remake fought during "Storm the Gates" at the end of Chapter 7, "A Trap Is Sprung".

Before fighting the Airbuster itself, during "Sentenced to Death", the player can sabotage it by extracting components from it. Extracting bomber components weakens its Big Bomber ability, while extracting AI processors slows its casting of abilities.

The battle has a 25-minute time limit, but it should be easy to finish in time and there is no need to rush. It is weak to

Lightning and has multiple battle phases; in the last phase, the Airbuster will fly. The player can thus use both physical attacks and abilities and magic to defeat it, and it is a good idea to equip all party members with some offensive

The attacks used depend on the boss's HP.

Before the boss battle the player could sabotage the mech's deployment by making sure some parts do not get installed in "Sentenced to Death". The player finds key cards in the control rooms where they can choose which parts to dispose of. Before the boss battle, the player can optionally visit the disposal room to collect the items they disposed of as spoils.

Removing AI programming cores makes Airbuster shoot lightning beams from its hands less often, and the party gets stunned less by its electric attacks. Removing the big bomber shells will reduce Airbuster's damage output and ammunition, and it uses its Big Bomber less often. Removing M-units has no effect on the boss's behavior, but nets the player some items instead.

Sewer rats of Avalanche, pawns of Wutai! The people of Midgar will now see you for the cowards you are!

Heidegger as the Airbuster battle begins

The party is separated as the battle starts, with Cloud being alone on one side, and Barret and Tifa on the other. The Airbuster is a threat to be reckoned with even when fought from two sides. It uses various abilities, the most common being normal gunfire, as well two very dangerous attacks: Finger Beam and EM Depth Charge, both that can stun; if any party member is stunned, Airbuster targets them with Big Bomber, which deals massive damage. Airbuster is weak to

Wind elements, Lightning being best for staggering it.

When Airbuster has lost around 1/3 of its HP, it changes tactics. It moves towards the entrance of the reactor, and uses a powerful attack called Tankbuster, firing a continuous straight beam of energy for heavy damage if it hits. Its short-range flame attack can also be deadly. Aside from Tankbuster and the flame attack, this phase goes like first phase.

After losing 2/3 of its HP, Airbuster takes to the air and becomes unreachable by melee attacks until it flies in range. The player should still stay on the lookout for Tankbuster, as it will now track a target. Also, when in close range, it will unleash its flame attack. Once the Airbuster has around 15% health left, it'll stay on melee range indefinitely and alternate between Finger Beam, Shoulder Beam and Big Bomber.

The Airbuster drops the Titanium Bangle when defeated.

Pay attention to the Airbuster attack patterns. If its fingers start glowing blue, it'll use Finger Beam; blocking it will prevent the stun. Should one of the characters get stunned and targeted for Big Bomber, the player can use

Barrier on them to mitigate damage and keep attacking the Airbuster until it staggers. Using

Aero spells, or the

Elemental Materia in conjunction with

Wind Materia in a weapon, can help a lot.

The player should be on the lookout for the electrified mines and avoid them when the boss deploys them. When the Airbuster uses Tankbuster, the player can avoid it by maneuvering away from the beam's range to the sides of the catwalk, then resume onslaught until it is used again. Since Barret can use guns, he can stay out of the way of attacks the whole time, and can attack the Airbuster while it remains stationary firing its energy beam.

When the Airbuster begins to fly, Barret's ranged attacks and thunder and wind spells can be used to damage it. Tifa can use her Unbridled Strength to level 3 and then use spells. Wind spells are little more effective against the flying form. Once Airbuster comes close enough, it can again be hit with melee attacks. If Cloud's or Tifa's Limit Breaks fill at this stage, the player can wait to unleash them when the Airbuster draws near again.

If the summon prompt appears, summoning Ifrit and using his Radiant Plume is effective.

On hard mode, the Airbuster is mostly the same but has one new devastating ability in the second phase: it can detach its arms, putting them to the sides of the area, and have them strike the party with stunning rays, making the party vulnerable to Big Bomber. At this point the party should focus on taking down one of the arms to make Airbuster re-attach them. Cloud can get close to them and use Punisher Mode tactics, and lightning magic is also effective to destroy them fast.

Barret can use Steelskin and then Lifesaver to protect the party, and the player can cast Barrier and

Regen on him to further help his tanking.

Prayer Materia can be brought along for MP-free party-wide healing, though it is safe to expend all MP here. Linking the

Magnify Materia lets the player bolster the whole team's defenses at once. If the player has two elemental materia, they can link them with lightning materia to two party members' weapons; Barret may be good as he can attack physically even when the Airbuster moves out of range. The others can use magic and support skills at this point; any offensive spells can be linked with

Leviathan and Bahamut are the best summons for this fight, specially during the third phase. Bahamut in particular can easily hit the Airbuster from afar with all his abilities.

"The Airbuster" is a heavy metal arrangement of "Fight On!". It was arranged by Tadayoshi Makino. 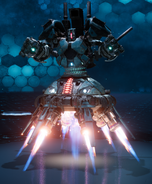 The Airbuster in the basement of Sector 5's Reactor.