Though localized as "Highwind" for Final Fantasy XV, all further uses of the ability use the original name "Air Superiority", perhaps to help distinguish from another ability also called "Highwind" associated with playable dragoons that the English naming also alludes to.

Aranea uses Highwind when she is a guest during Chapter 7 and later when she randomly assists the party for battles at night against daemons and hunts. The Highwind Technique can be invoked at the cost of 3 tech bars, dealing significant damage to one or more enemies in a small radius of effect.

Aranea has two Techniques: Highwind is used outdoors, while Dragoon Dive is used indoors. The player can again invoke Aranea to use them with the Technique command, and her Techniques cost 2 tech bars. Aranea downing enemies can make enemies weak for Prompto to use his crackshot for critical damage.

Aranea has Air Superiority as her EX Ability. It is learned via the spear Bohrenspeer with the Affinity passive "Woman of the Skies", with an equip cost of 20 CP. In addition, Aranea has a different ability called "Highwind" which is unlocked when her Crystal Strength is leveled to 20.

Air Superiority is Aranea's Burst Soul Break. The ability can only be learned from the "Aranea's Cowl (XV)" armor piece. The ability deals eight jump lightning and dark attacks to a single target. The ability also temporarily infuses the user with the power of lightning, and grants Haste and Burst Mode.

Despite being called "Air Superiority" in the English localization of the game, the ability is actually Aranea's Highwind technique from "Final Fantasy XV." This name change was done to avoid confusion with her Highwind (ハイウインド, Haiwindo?) Overstrike Soul Break learned from the 6-star relic Stoss Spear, which is a different ability in Japanese. 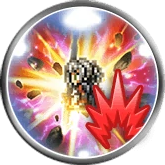 Air supremacy describes a combat situation where one side holds control of air warfare over opposing forces. Increasing control by one corresponds to decreasing control by the other. "Air superiority" is the second level behind air supremacy, where a side is in a more favorable position than the opponent.