Air Racket is the weakest racket, providing 13 Attack, is Wind-elemental, and teaches the abilities Scan and Panacea. It can be bought for 400 gil at Summit Station and Treno when visited for the first time, and can be equipped by Dagger and Eiko. One copy can also be found at Ipsen's Castle, on a walkway to the left of the elevator.

Air Racket is a Staff obtained during the Final Fantasy IX event, Escape from Alexandria Castle. It provides 28 ATK, 28 SPR, and access to the spell Poisona. 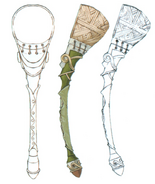