Antlion, this is Tonberry! My engines are hit. She'll not hold much longer!

Air Cutter Remora is the tutorial boss in Final Fantasy XII fought in the prologue. While on a rescue mission to save their king, Dalmascan knights—including Basch and Reks—are ambushed by an Air Cutter Remora, codenamed Tonberry. Basch ends the battle by unleashing Fulminating Darkness, his 1st Rank Quickening.

Generic aircraft using the Air Cutter Remora's model with different texturing are used in other parts of the game. For example, a red and black colored version is used by Doctor Cid to flee after the first battle with him. In Final Fantasy XII: Revenant Wings, the Remora esper is based more on Air Cutter Remora than the original Remora summon.

Dr. Cid has been working on developing thought-driven combat weapons, called "rooks," for some time now. Test models saw their first combat use in a recent incident at the Draklor Laboratory.
Three new models have been produced based on data collected during the Draklor Laboratory incident.

Small fighter airship of the Imperial army.
Gun turrets placed at the keel, and turrets on the deck make this an effective weapon against air and ground threats.
A mainstay of the Imperial Armored Forces together with the newer CB58 Valfarre fighter.
The initials of the craft's designer, Dr. Cid, and the year of its production adorn the hull.

The player controls a Lv.3 Reks, who is equipped with a Mythril Sword and a shield, and a knowledge of basic White and Black Magick. There are also three other low-level Dalmascan soldiers, including Basch, who have Attack powers higher than Reks. The accompanying Dalmascan soldiers will hand out infinite Potions to those with low HP, making the battle effectively impossible to lose.

Air Cutter Remora will unleash its special attack, Remora Strike, at least three times during the battle, according to how much HP it has left. When it has 40% HP left, Basch will unleash Fulminating Darkness, ending the battle.

Air Cutter Remora is the boss of the "Nalbina Fortress - Inner Ward" Core Dungeon. It only has two attacks: physical blows that can hit either a single target or the entire party. The boss is also fought in some Final Fantasy XII event dungeons. 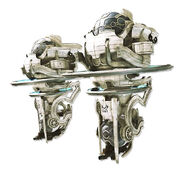 [view · edit · purge]The remora is a small species of fish, often found in association with sharks. It possesses a sucker-like disc, which it uses to attach itself onto other fish, so as to gain protection and easy food. In Latin, remora means "delay." Like all Archadian airships in Final Fantasy XII, Air Cutter Remora is named after a classic summon or monster.