Meet 'Airbuster', a techno-soldier. Our Weapon Development Department created him. I'm sure the data he'll extract from your dead bodies will be of great use to us in future experiments.

Air Buster, referred to as Airbuster in dialogue and the BradyGames guide, is a boss in Final Fantasy VII. Cloud, Barret, and Tifa encounter it outside of the Sector 5 Reactor.

Nothing
Titan Bangle (100%)
Nothing

The battle is a Side Attack with Tifa and Barret on one side, Cloud on the other side, and Air Buster in the middle. Unlike most opponents, attacks to the back of Air Buster will deal five-times normal damage instead of the regular double damage. Air Buster turns to face whoever attacked it last.

Air Buster resists Fire. It will only use Big Bomber for the first four turns in "Program 1 Operation". After that, Big Bomber will be out of ammo and Airbuster enters "Program 2 Operation" and uses the weaker Energy Ball for the rest of the battle. It uses Bodyblow as a counter-attack that may be used either turning to face Barret and Tifa (high accuracy), or turning to face Cloud (low accuracy). Airbuster can hit one character from its behind using his Rear Gun attack. When Air Buster has below 20% of its Max HP, it can no longer turn.

Using Limit Breaks against Air Buster's back results in a quick fight and the combined power of Cloud's and Barret's Limits can take down Air Buster in a single turn. If the party doesn't have Limit Breaks built up, they should use normal attacks against its back and use Bolt.

If (Self is not facing SelectedTarget) Then
If (TurnBroken == 0) Then

If (Self is facing Cloud) Then: Use Turn to face Barret & Tifa

Else: Use Turn to face Cloud

Use Big Bomber on SelectedTarget

If (Self is facing Cloud) Then: Use Rear Gun on SelectedTarget

Else: Use Energy Ball on SelectedTarget

If (Self is facing Cloud) Then: Use Energy Ball on SelectedTarget

Else: Use Rear Gun on Selected Target

Use Turn to face Barret & Tifa

Use Turn to face Cloud

The designs of the Weapons and some Shinra robots in Final Fantasy VII are highly reminiscent of mecha from the Gundam franchise; the Air Buster resembles the MSN-02 Zeong. The resemblance is heightened in the Air Buster's VII Remake counterpart, which possesses the Zeong's signature weapons and is described as incomplete in similar fashion to the Zeong's own deployment.

Air Buster appears as an enemy in Pictlogica Final Fantasy.

Air Buster's Big Bomber ability can deal a lot of damage, so make sure you're ready to heal, kupo. Good thing he only has four shots! It's still a good idea to heal up right away, though.

Air Buster appears as the boss of Mako Reactor No. 5 in Final Fantasy Record Keeper.

Out of Ammo form

When Air Buster runs out of Big Bomber shells, it enters its Out of Ammo form.

The Air Buster is not going to be a particularly easy battle at very low levels since, at this point, the party has only gained one or two levels from the start of their quest after beating the Guard Scorpion. What makes this battle frustrating is that the mech will counter just about anything physical with one of its attacks. And when it runs out of bombs, the Air Buster compensates by hitting harder. Have the White Mage ready to heal whosoever gets picked on, the Black Mage casting Thunder, and Tyro attacking with the strongest weapon found in the opening tutorial. Though it could be a long fight, Air Buster will fall. Cloud will join the party after the first visit; it may just be wise to warm him up here before taking on a new Record Realm. After all, four heads are better than three. 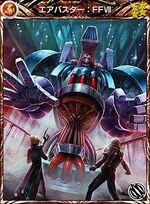