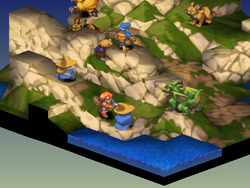 Damage inflicted is dependent on the weapon type used. It deals damage like Attack, increased by the weapon's attack times the level of the ability. For example, with a weapon with 10 attack, Aim +1 would deal 10 more damage, 20 with Aim +2. Swiftness does not make Aim activate quicker.