Marina Inoue (War Of The Visions)

Cristina Vee (War Of The Visions)

A machine engineer from Dilmagia who specializes in weaponry. Aileen develops weapons of a smaller, more personal scale than those mounted on the airships constructed in her hometown. Currently, she travels across the world polishing her skills in combat and claims that there is a weapon for everyone.

Aileen is a supporting character from Final Fantasy Brave Exvius. A weapons specialist from Dirnado who travels around the world on a journey of self-improvement, her vision can be summoned by Rain and Lasswell to aid them in their battles. She is a benefactor to the Raven rebel army, led by Jake.

Aileen has blue eyes and waist-length pink hair with a pair of goggles on her forehead, though tilted to the side.

Her dressy variant wears a long purple dress and purple shoes and a purple flower accessory on the left side of her hair.

Her explorer variant’s hair is tied into a ponytail and wears Lara Croft's outfit,

Hailing from Industrial City Dilmagia, Aileen is a machine engineer who specializes in designing technical weaponry and small arms. At one point, she was tasked to create weapons for the airships constructed there, but she decided leave on a journey of self-improvement instead.

Shortly afterwards, Aileen was offered a job manufacturing weapons in large numbers for the militaristic Zoldaad Empire on Emperor Sozhe's request, she denied his request on the excuse that she creates customized work rather than mass production, making his request impossible while in truth she refused because she didn't want her work to be misused for Sozhe's agenda. She was far more accepting of a request to manufacture weapons from Jake, leader of the Raven rebel army that opposes the empire's rule, after hearing his motives of opposing the empire and deeming him worthy. She thus developed a pair of customized daggers for him, the Bowie Knife for Abel, and the Machine Gun+ for Jean.

At the end of Season One, she is seen looking up to the sky and lending her strength for the party to fight the Chaotic Darkness.

In "Bazooka of Love", Aileen is traveling in the same airship as Jake and Lid.

In battle, Aileen wields the spear Artisan, her own Trust Master reward.

Aileen can equip all types of weapons, a feat achievable only by two other units: Firion and Gilgamesh. If Aileen has the Equip H Shield passive equipped, this makes her the sole unit able to use all types of equipment. 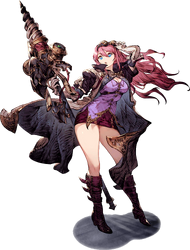 Aileen appears as a summonable vision and optional playable character. She retains her original appearance. She serves as a character representative from Final Fantasy: Brave Exvius. 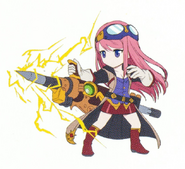