Diana's older brother, Aigis is a swordsman who has been training Sol in the way of the blade. His skill is unrivaled through Lux, leading many in the kingdom to fer to him as "the hero of the land." His parents passed into the great beyond when Aigis was the tender age of ten, and he has been looking after her since.

Aigis is a playable character in Final Fantasy Dimensions. He is the older brother of Diana and mentor to Sol and Glaive, made into one of the Warriors of Light by the Crystal of Lux.

Aigis has pale skin and short lavender-silver hair. He wears a long green coat with brown cuffs over a high-collared white robe, ruffled at the front and held round the waist with a brown belt, with another across his chest from his left shoulder. He wears white socks and brown boots. When he changes jobs, his dominant color is the dark green of his coat.

A swordsman and Sol's teacher. Lost his parents at a young age. Brother of Diana.

Sol, accompanied by Diana and Glaive, go to the Checkpoint to welcome Aigis. When they reach Lux he is summoned to the castle. After Sol's party infiltrates Castle Lux, Aigis converses with the King about the crystal's abnormalities. Aigis senses his students are eavesdropping, and calls them out. He asks for the king's permission to bring his students with him, and together, they head to the Crystal Temple. The party is defeated by the Watchbeast, and after the huge explosion, Aigis finds himself with Sol, but separated from Glaive and Diana.

Aigis's stats can benefit the Paladin job due to his high physical stat growth, his high MP growth, combined with his decent magical stats and high physical prowess, can also benefit the Red Mage job, however, since the stat differences between characters are minimal, and abilities and equipment are of greater importance, he can competently do any job. Jobs also gain stat boosts when leveling up, which helps even out stats. 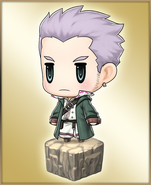 Aigis appears with a card that depicts his official artwork.

"Aigis" is a play on "Aegis", playing on his role as a protector. [view · edit · purge]The Aegis is the shield wielded by Athena in Greek mythology. It is often interpreted as a shield made of animal hide, often featuring the head of Medusa or another Gorgon. In some depictions the Aegis actually belongs to Zeus, in which it may be his breastplate rather than a shield, and Zeus would lend it to various gods in deeds they need his aid in. However in popular culture the Aegis is more commonly associated with Athena.