Cid Pollendina: Oh, shut up and help me remodel the Ai Hayakawa page!
Please expand this article into a full one. The following tasks need to be completed:

Ai Hayakawa is one of the main characters in Final Fantasy: Unlimited. She is one of a set of twins, with her brother Yu Hayakawa being the younger. When they were twelve years old, their parents, the geologists Joe and Mary, left their island home of Sadoshima in Japan for their second trip to the Wonderland. Their parents did not return, prompting the twins to go look for them.

Of the twins, Ai is usually the more practical, taking charge of the situation even in the presence of her elders, such as Lisa. She has a short temper, as shown when she flies into a blind rage over small things, such as Poshepoke's mischief or any other Wonderland creature's peculiar behavior. She is untrusting, initially treating Lisa, Kaze, Fungo, Chocoimo and Chocobaba with hostility, though she quickly warms up to people.

Twelve years before the main setting of Final Fantasy Unlimited, Ai and Yu were a part of Chaos, but split from the main body for unknown reasons. When Joe and Mary Hayakawa discovered the twins, having recently lost an unborn child, Ai and Yu were still in the form of babies, and were thus taken in by the couple. Joe and Mary raised the twins as their own children who were brought up to believe they were human. When her parents left for Wonderland a second time and failed to return, Ai took care of feeding herself and her brother, albeit mainly instant food.

After her parents were absent for a much longer stretch then originally anticipated, Ai convinced her brother that they should venture into Wonderland to look for them. After hearing the rumor of the Subway's arrival at a specific time at night, Ai and Yu set off, meeting up with Lisa Pacifist shortly after boarding. Though she initially distrusts Lisa, Ai allows her to follow them, and quickly befriends her. At there first stop, Yu stumbles across a strange man bound by roots. After being chased by a large monster, which Lisa initially dispatches with her Kigen arts, furthering Ai distrust of her, the man returns and destroys the creature with a powerful gun, giving his name as Kaze. Ai distrusts the newcomer, and is annoyed when Yu insists engaging him in conversation. After leaving the town and making their way to their second stop, Ai's bang is stolen, and she loses the thief. She meets Fabula and obtains Poshepoke.

After traveling with her twin, Lisa and Chobi for some time Ai separates from them while within the Ocean Puzzle. She meets Clear, a boy that embodies the soul of Omega, for whom she develops a crush on. They are separated soon after but she retains a single glove he wore to keep his powers in check, which she becomes very possessive of.

Soon after she, her brother, Kaze, Makenshi and Lisa are captured by Earl Tyrant. Ai learns of her parents' enslavement and her origins as a part of Chaos. Clear is also in the Earl's captivity, and he is compressed into crystal form before her.

This section in Final Fantasy: Unlimited is empty or needs to be expanded. You can help the Final Fantasy Wiki by expanding it.
Spoilers end here.

Poshepocket is a small sharp-toothed creature that functions as a handbag fashion wise, and a means for the use of hammerspace in terms of the series's mechanics. It devours copious amounts of food in a single bite, and later is shown consuming the Hug-hug, even though the Hug-hug had already eaten it.

It is normally mischievous, and was described by Ai as "scarily cute", a term Ai has used to describe a small number of Wonderland creatures. It was given to her by Fabula, and is the only appearance of such a creature in the series.

Illustrations during early production show Ai fighting with a crossbow.

Ai and Yu in a park

Ai and Kaze exploding a guy 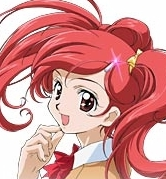 Ai in FFU: After.

The name Ai means "love". Her name and that of her twin also invoke the words "I" and "You".