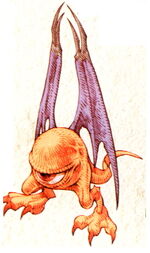 A peculiar monster whose body consists of one gigantic eye. It uses a baleful stare to attack its enemies.

Ahrimans (アーリマン, Āriman?) are monsters in Final Fantasy Tactics which use their single eye to inflict dangerous status effects such as Stone. Members of the Ahriman class are flying enemies, and are weak against Ice and resistant against Wind.

The Floating Eye is a weakest version of the Ahriman specie. Its eye normally cannot induce any abnormal statuses.

Ahrimans are not to be underestimated. A "Bewitching Gaze" from behind can take out units in a hurry. The player should take advantage of their low HP and cut them down preemptively.

The damage formula for Wing Buffet is as follows:

The formula for the success of status attacks are as follows: 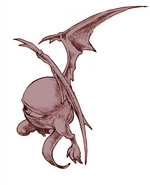 War of the Lions.