Ahriman is an enemy from Final Fantasy X encountered in Mt. Gagazet caves and the Zanarkand ruins. It has the same model as the Floating Death.

Ahriman uses two magical attacks: Ultrasonics generated with its wings that will hit all party members, and a Gaze generated from its eye that will hit one party member for less damage, but will sometimes cause Confusion; the success rate is lowered when Provoked. Players can use the Death spell for an easy kill.

In the original version, Ahriman drop weapons with Strength +3% and Magic +3% instead of Strength +5%, Magic +5%, and Distill Speed.

Ahriman is an enemy in various Final Fantasy X and X-2 dungeons. It can use Gaze to damage one target and inflict Confuse. 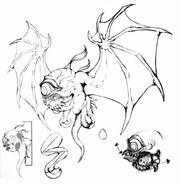 [view · edit · purge]Angra Mainyu in the Avestan language and Ahriman in Middle Persian is the Zoroastrian idea of the devil, meaning "destructive spirit."

Retrieved from "https://finalfantasy.fandom.com/wiki/Ahriman_(Final_Fantasy_X)?oldid=3366766"
Community content is available under CC-BY-SA unless otherwise noted.