Upon the death of the king, this knight is tasked with protecting Princess Ovelia. She shows great devotion to her task, risking life and liberty for the girl despite suffering betrayal from every quarter...

Agrias is unlocked by collecting Orange Crystal Shards. Curiously, she is depicted wielding the Final Fantasy IX version of Save The Queen.

She is a Defense oriented character. Her Limit, Hallowed Bolt, deals damage in proportion to her Strength and Spirit. 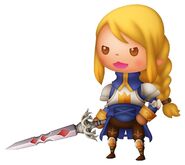