Have you no pride, no honor?

Agrias is accompanied by two Knights, Alicia and Lavian. While not as strong as Agrias, they are stronger than an average Knight at the same level. The two join Ramza Beoulve's party at the beginning of Chapter 2.

Agrias has a strong sense of duty and honor. As Princess Ovelia's bodyguard, Agrias will do anything to protect her. She has a unwavering sense of justice and abhors the corruption in the ruling powers of Ivalice that wish to exploit Ovelia for their own schemes.

Agrias and Ovelia are at Orbonne Monastery during the time leading up to the outbreak of the War of the Lions. Concerned for Ovelia's safety—as she was both in the way of Duke Larg's plans and a necessary part of Duke Goltanna's—Agrias hires the mercenary troop led by Goffard Gaffgarion to join in Ovelia's defense. One of the members of Gaffgarion's troop is Ramza Beoulve, a noble who has disassociated himself with his brothers, Zalbaag and Dycedarg Beoulve.

The monastery comes under attack by several Order of the Northern Sky knights disguised as knights from Order of the Southern Sky. Agrias, Ramza and Gaffgarion fight them off, but Delita Heiral slips into the monastery through a back door and kidnaps Ovelia. Agrias and Ramza are too slow to stop Delita from escaping on a chocobo. After she learns Ramza knows the kidnapper, they set out to recover the princess, joined with Gaffgarion.

Agrias suggests Ovelia be taken to Lionel Castle, where she believes Cardinal Delacroix of the supposedly neutral Church of Glabados could protect her. On the way to the castle they came across a hostile encounter between a young man named Mustadio Bunansa and several members of Baert Trading Company. Ramza and Agrias dispatch the mercenaries and rescue Mustadio, who reveals he was being hunted because he knows of the location of the Taurus auracite, a valuable artefact. Ramza and Agrias agree to escort him to Lionel Castle, and after another fight with Baert Trading Company, they arrive at Lionel. Ramza agrees to take Mustadio to his home in the nearby Clockwork City of Goug while Ovelia and Agrias stay at the castle.

Delacroix is plotting against them and has Ovelia and Agrias imprisoned. Agrias learns Ovelia is to be executed and escapes, but Delacroix sends out pursuit units. Agrias flees to the south, and catches up with Ramza and Mustadio, who are by now aware of Delacroix's intentions. They help Agrias defeat her pursuers, and Agrias warns them of Delacroix's plan to kill Ovelia.

Agrias has been fed false information, and her escape from Lionel Castle is a part of Delacroix's plan so his men can hunt down the Taurus auracite and anyone who knows the truth of it. When they reach Golgollada Gallows, the heroes are surprised to find the Ovelia about to be executed is a decoy. The executioner removes his hood, revealing himself as Gaffgarion. Ramza and Agrias have walked into a trap. During the ensuing battle Gaffgarion reveals Ramza is a member of the noble House Beoulve, which shocks Agrias. Ramza explains he was disillusioned with his brothers' actions and Agrias accepts his explanation. Gaffgarion is defeated and forced to retreat to Lionel Castle.

Ramza and Agrias return to Lionel to break Ovelia out. As Ramza attempts to open the gate, Gaffgarion confronts him, and Agrias finds herself in a trap as several of Lionel's soldiers, including Summoners, emerge from hiding. As Ramza and Gaffgarion duel inside the gate, Agrias and the rest of Ramza's allies defeat the Lionel guards. Ramza, too, is victorious, and opens the gate for Agrias and the rest of the team. They confront Delacroix, but Princess Ovelia has already been moved elsewhere.

Delacroix pulls out the Scorpio auracite and transforms into the Cúchulainn, one of the Lucavi beasts. Ramza and Agrias overcome him, recovering the Scorpio Stone. Agrias remains with Ramza throughout the remainder of his quest to defeat the Lucavi.

Near end of Chapter 4, Agrias is revealed to be the one who gave the dagger, later used to try to kill Delita, to Ovelia during their reunion.

Agrias's default and exclusive job is the Holy Knight, one of the "special Knight" jobs, which focuses on swords and techniques that cause heavy damage from afar. It is one of the only classes in the game with natural 25% C-EV (Character Attack Evasion), tied with Balthier's Sky Pirate.

Agrias temporarily joins Ramza's party alongside Gaffgarion, at the start of Chapter 2 at level 10 with 71 Bravery, 63 Faith, and equipped with the Mythril Sword, Mythril Shield, Golden Armor, and Golden Helm. Later on at Balias Swale, Agrias is again a guest starting at level 12 with the same Bravery and Faith as before, but now equipped with a Coral Sword and a Diamond Bracelet.

When fought in the eleventh Rendezvous battle: All-Star Melee, Agrias is 2 levels higher than the highest level deployed unit. She starts with 71 Bravery and 63 Faith and a Holy Knight, and comes equipped with the Excalibur, a full set of Crystal equipment, and oddly enough a Ribbon, a head equipment equipped in her accessory slot. She has access to the Holy Sword and White Magick commands, as well as the abilities Shirahadori, Safeguard, and Move +2.

When fought in the fourteen Rendezvous battle: Brave Story, she is level 99 and starts with 71 Bravery and 63 Faith. She comes equipped with the Save the Queen, a full set of Crystal equipment, and a random accessory. She has access to the Holy Sword and Iaido commands, as well as to the abilities Shirahadori, Defense Boost, and Move +2.

If Ramza keeps Agrias, Alicia, Lavian and Mustadio in the party, and the party reaches a city or a town (but not a castle town) on the 1st of Cancer in the final chapter, Mustadio buys Agrias the Tynar Rouge lip rouge for her birthday, and hints at a hidden affection for her. It costs 50,000 gil, but the party must have at least 500,000 gil to activate this quest. The event is found exclusively in the Final Fantasy Tactics: The War of the Lions.

Agrias has appeared in the following games throughout the Final Fantasy series:

Agrias has made key guest appearances in the following non-Final Fantasy media:

Ravness Loxaerion, a character from the PSP remake of Tactics Ogre: Let Us Cling Together, seems to be inspired by Agrias. Both games shared the same director and character designer, Yasumi Matsuno and Akihiko Yoshida. 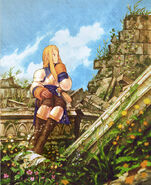 CG Render of Agrias from Final Fantasy Tactics: The War of the Lions. 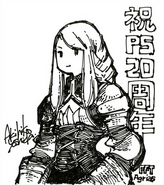 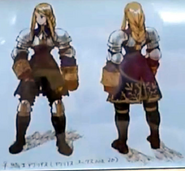 Earlier artwork shared by Yasumi Matsuno on May 19, 2018 over livestream.

[view · edit · purge]An oak is a tree or shrub in the genus Quercus. The common name "oak" may also appear in the names of species in related genera, notably Lithocarpus.