Agnès watches over the Wind Crystal, one of the four crystals worshiped by faithful of Crystal Orthodoxy. When a dark power overruns her temple and the world, she sets off on a quest to awaken the crystals.

Agnès Oblige [ɑɲˈɛs o'bliʒ], though sometimes called /ˈɑɲəs/, is a playable character in the Bravely series. As the vestal of wind, she becomes aware of the danger that is coming upon the world, and with the guidance of Airy, embarks on a journey to reawaken the four crystals. The Bravely series has many allusions to the Final Fantasy series, and Agnès has appeared in spin-off games in the latter.

In Bravely Default, Agnès has brown eyes and long brown hair down to just above her knees, kept in place with a black hairband. She wears a knee-length white dress with dark sleeves and black fur trimming at the hem and black embroidery at the bust. She wears a black bolero, a black cinch belt, knee-high black boots with pom-poms and elbow-length black gloves. She has a blue pendant, given to her by the Sage when she was a child. While purifying a crystal, Agnès dons the Vestal Garb which consists of a short white dress with decorative patterns. Her sleeves wrap around her upper arms. She wears black gloves and brown boots. While using the asterisks, Agnès's appearance changes according to which job she is currently using.

In Bravely Second, Agnès retains her long brown hair, now wearing a white hairband to keep it in place. She is outfitted in a formal white dress, somewhat reminiscent of her vestal garb, that is emblazoned with varying paraphernalia meant to signify her position as Pope. She wears black gloves and white thigh-high boots. She retains her blue pendant which is now slightly broken.

Agnès is a polite, motherly young woman; she is slow to open up to others, though once she does is a kind, if reticent, person. She is intent on her role as a vestal and is not originally keen on letting others accompany her on the notion that bringing light to the crystals is her sole mission; she does not want other people to be burden to her or be burdened with her problems. Agnès is quiet, reserved, does not show her emotions or worries readily, and has trouble admitting them to herself. She holds people at a distance and mistrusts others, for some time even her own allies. She worries that the townsfolk see her as a mere object to enact her duty as vestal rather than as a human being, and though she is composed on the exterior, admits to being terrified of others.

Agnès's biggest flaws are in her naivete and shortsightedness. Agnès does not seem to value her own life, often playing the role of martyr for the sake of others and committing unpleasant acts, feeling that it is her duty. Upon learning of the Crystal Orthodoxy's history and wrongdoings, she becomes confused about her goals and allegiances, and comes to resent her own loyalties due to the part they have played in allowing her to be manipulated. 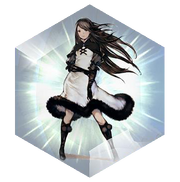 Agnès appeared as a light-elemental summon in the original free-to-play version of Final Fantasy Dimensions II. She was a limited edition cameo summon as part of the Bravely Archive collaboration event. To obtain her, players were required to input a gift code they received for completing a dungeon in Bravely Archive.

Her special attack was Holy Weapon, which dealt light-elemental damage to all enemies and gradually restored HP to all party members. Summoning Agnès required 3 summon gauges. Agnès was a locked rank 4 signet and could not rank up to higher levels.

Agnès allowed the wielder to use the following abilities:

Her signet artwork was her official artwork from Bravely Default.

Similar to other series cameo characters, the Agnès signet was removed from the premium release of Final Fantasy Dimensions II.

Bravo Bunny Agnès appears as a character and summonable vision. She retains her appearance as a Performer. She serves as a character representative from Bravely Default.

[view · edit · purge]Agnès comes from Ancient Greek ἁγνός (agnós) which means "pure" or "chaste". It could also refer to the French agnelle, the feminine form of agneau, which means "lamb".

[view · edit · purge]Oblige is the first- or third-person singular form of the French verb obliger, meaning "to obligate".

Characters
Retrieved from "https://finalfantasy.fandom.com/wiki/Agnès_Oblige?oldid=3398932"
Community content is available under CC-BY-SA unless otherwise noted.