Agito Cadets (アギト候補生, Agito Kōhosei?), or simply Cadets (候補生, Kōhosei?), are trainees of Akademeia of the Dominion of Rubrum in Final Fantasy Type-0 and Final Fantasy Agito. They are trained in the use of magic as per the wish of the Vermilion Bird Crystal, whose peristylium the cadets are sworn to serve. The Crystal chooses its l'Cie from their ranks, its goal that come Tempus Finis, the l'Cie would enter the Land of Judgment and become Agito, saving Orience.

Cadets are assigned to twelve classes that specialize in different combat duties. Gifted cadets can be transferred to the clandestine Class Zero, the thirteenth and elite class.

After the formation of the dominion and its military, the cadets began to enmesh with the legions. Although Agito Cadets were not officially affiliated with Rubrum's military, they were required to participate in routine combat training to hone their abilities. Several cadets also gained in-the-field experience through participation in remote, small-scale operations.

After Milites invades Rubrum, Agito Cadets officially join the ranks of the dominion legions. The Central Command decides that, due to the cadets' limited numbers, each unit would consist of ten to twenty cadets attached to an infantry regiment. Each team would receive an additional support unit, forming an independent composite brigade.

Legion officials struggled directing these small-yet-powerful squads, and the administration assigned Akademeia instructors as the cadets' commanding officers who give out mission orders. The military views the cadet units as powerful, highly mobile squads.

The basic cadet uniform consists of a black jacket and white pants for males, and a red plaid skirt and a black jacket for females. Both sexes wear mantles with a gold ring that has a phoenix, and gold pauldrons with an indent on the inner edge marked with a gear pattern, a recurring symbol in Rubrum. The mantle's color depends on the student's class; e.g. Class Zero has red mantles, Class First has blue mantles, and so on. Trainees wear gray mantles. The mantles are said to analyze the cadets' biological data and provide information on how to treat injuries incurred in the field. Most students customize their uniform to suit their own personal style and/or for practicality in combat.

Members of Class Zero, along with Tiz and Joker, are also depicted as wearing the long hooded overcoats worn by the dominion legionaries; it is unknown if these coats are standard issue for all Akademeia students. The summer uniform consists of a short-sleeved white shirt, black gloves, and capes, with a black tie and dark pants for male students and a black vest, bow tie, and black skirt for females. The formal uniform is an alternate coloring of the students' standard uniforms; Class Zero cadets wear red coats with black cuffs, white mantles, and white gloves, with black pants for male students and black skirts for females.

Aside from Class Zero, there are twelve classes that specialize in different duties for battle, along with a group designated for trainees. Classes are identified by the color of the mantles worn by its cadets, and each class moogle represents the characteristics of its assigned class.[1] Contrary to popular belief, the twelve classes do not represent job classes. Instead, they have various specialties, with some classes sharing similar duties, and other classes just being known for the types of students they enroll.

To become a cadet one must pass a written exam, a practical exam and an interview, all of which demand exceptional talent and effort. Becoming a cadet has many perks, as even if their magic ability diminishes with age, cadet experience can help secure a position in many fields.

The player characters—fourteen in all—are all Agito Cadets from Class Zero.

Agito Cadets are fought as enemies during the mission "Machina's Struggle".

The player can create their own cadet, to serve as the game's protagonist. 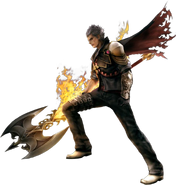 Zhuyu's Class Zero uniform from around 100 years before the events of Final Fantasy Type-0.