Various, depends on tale, see below
Agart is a town in Final Fantasy IV. It is located on an island south of Baron, and it is the home of the descendants of Dwarves from the Underworld. The town contains a well and an observatory in which Corio studies the Moon.

Cecil, Kain, Rosa, Yang, and Cid visit the well in the center of the town and throw in the Magma Rock (Key of Magma on the SNES) to open the way to the Underworld.

Agart as well as the Agart Mine is seen on the overworld map when the Falcon dives into the hole to reach the underworld. Unfortunately, the party cannot explore both of these locations.

Rydia and Luca land near Agart when their airship malfunctions, and must travel into the Agart Mines to obtain an Agartite, as well as Mythril Springs, Bolts, and Nuts to repair the airship.

Later, the town is overrun with monsters, and Rydia and Luca return to Agart with Edge and the Man in Black. They find the Mysterious Girl. who summons Titan to attack them. Initially, Titan uses Gaia's Wrath, dumping the party in an underground cavern under Agart. Once the party has rescued Porom in Mysidia, she will appear during the fight to cast Float on the party and stop Titan's quakes from harming them, allowing them to return Titan to his senses and regain his power for Rydia.

The observatory is the first building to the left. It houses the giant telescope in which Corio studies the Twin Moons. The player can look into it as well.

It is the first structure found if the player goes straight from the entrance. During the first visit, the player must select the Magma Key from the inventory to open the way to the Underworld.

An empty house is found north of the village well. Namingway can be found inside it if the player has obtained the music box in Troia. He demands the very rare Rainbow Pudding.

The Crystals
In Town

The background music that plays in Agart is the Final Fantasy IV "Town Theme". 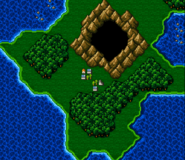 Agart on the World Map (SNES).

Agart on the World Map (GBA).

Agart on the world map (PSP).

Agart on the world map in Final Fantasy IV: The After Years (Wii).

Agart Subterrane in Final Fantasy IV: The After Years (Wii).

Agart Subterrane in Final Fantasy IV: The After Years (PSP).
Add a photo to this gallery

[view · edit · purge]Agartha is a legendary city that is said to reside in the earth's core. It is related to the belief in a hollow earth and is a popular subject in esotericism.