Aerouge is a fiend in Final Fantasy X, encountered in the Thunder Plains. It will attack with a Thundara spell every turn until defeated, and has a 33% chance of prioritizing Wakka, or whomever has the lowest Magic Defense if he isn't in the active party. It can be silenced to avoid its spells, but unless underleveled, Wakka should be able to kill it with one attack.

In the original version, Aerouges drop weapons with Strength +5% and Magic +5% instead of Distill Mana.

The Aerouge appears in numerous Final Fantasy X dungeons. It can use both a physical attack and Thundara, dealing lightning-elemental damage to one party member. 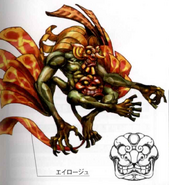 Retrieved from "https://finalfantasy.fandom.com/wiki/Aerouge?oldid=3363682"
Community content is available under CC-BY-SA unless otherwise noted.