Aeronite (アイロネート, Aironēto?, lit. Ironet), also known as Ironite, is a recurring enemy in the series that debuted in Final Fantasy VII.

Ironite is an enemy fought at Whirlwind Maze. They fight using physical attacks and the Sleepel spell, but are otherwise not difficult foes. If low on Phoenix Down, the player may steal some from them. Ironites are also encountered in the Battle Square after obtaining the Highwind and after regaining Cloud.

Ironite is an enemy fought at Burmecia and the King Ed Plains on the Mist Continent. They are semi-dangerous when first encountered, as their Flame attack can deal high Fire-elemental damage to the party, and they also use the Thundara spell. When eaten by Quina, they will teach the Blue Magic spell, Angel's Snack. 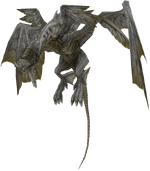 Ironite is an enemy fought at Lhusu Mines and Pharos. They are tricky foes as the player must use ranged attacks to hit them, and they use the Aeroga and Blizzaga spells, in addition to Crushing Fangs and Poison Breath, for their offense. The rare Leo Gem can be stolen from them.

Aeronite is a superboss that inhabits the Dead Dunes and moves around the desert as a space distortion. It can be found in the Giant's Sandbox from Day 7 onwards.

[view · edit · purge]Aero is a Greek prefix relating to air and flight. Common usages in modern times include the words "aeroplane" and "aerospace".