Aero Combatant is an enemy from Final Fantasy VII, fought by Cloud and Tifa during the attack by the Turks on Sector 7. It is also fought in the third round of the Battle Square before the player obtains Tiny Bronco. When fought in the Battle Square its stats are enhanced with double the normal HP and its Attack and Magic Attack are increased by 25%.

Kick, Propeller, Drop Down
None

Aero Combatant attacks one character using Kick and Propeller. When attacked, there is a 50% chance it will lose its propeller and drop to the ground. This changes its stats and attacks: Speed and Evade drop, but its Magic increases and its Magic Defense doubles. This increment of its Magic stat is unusable, because it does not use magical attacks in either its two forms. It also begins using two different attacks, Propeller Sword and Sword Rush, which inflict a similar decent damage as its previous attacks. It is weak to Gravity in either its two forms.

Aero Combatant is treated in battle as two separate enemies, both with a different AI script. Battle always starts with the Grounded version inactive (as opposed to incapacitated). If the Aero Combatant drops down after it is attacked, the flying version is removed and the grounded version becomes active, meaning it can now act and be targeted.

Use Propeller on random opponent

Use Kick on random opponent

Use Propeller Sword on random opponent

Use Sword Rush on random opponent 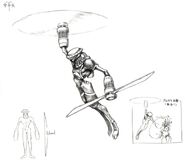 Sword Rush.
Add a photo to this gallery
Retrieved from "https://finalfantasy.fandom.com/wiki/Aero_Combatant?oldid=3295383"
Community content is available under CC-BY-SA unless otherwise noted.