; a shin-length pink summer dress that buttons up at the front, with red lining and worn under a red bolero jacket. In addition to brown boots, she wears metal bracers on her wrists, and the lower portion of the dress is left unbuttoned to allow for easier movement.

Aerith's first alternate outfit is based on Yoshitaka Amano's concept art of her.

She wears a pink bandeau dress with silver linings and a split along the front, a cropped, shoulder-less jacket with puffed sleeves, as well as pink and silver pointed high-heeled boots. Her hair ribbon is pink with blue-green polka dots, and is a different shape and knot from the ribbons in previous outfits.

Aerith’s second alternate outfit is based on her appearance in Crisis Core -Final Fantasy VII-.

She wears a blue and white thigh-length dress over a red camisole, and white wedge sandals with pink straps. The dress is adorned by blue lace bows at the bust and waist, while a small corsage of flowers lines the left shoulder strap. Her hair ribbon is the same shape as her original ribbon, but is a more reddish hue of pink. 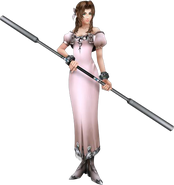 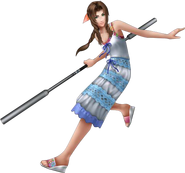 Aerith's weapon is the Guard Stick as depicted in her original concept art, which serves as her initial weapon in Final Fantasy VII. It is a large metal staff with two wider portions at either end, and a handgrip in the middle. 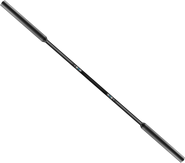 As an Assist-only character, Aerith is able to perform two of her Limit Breaks from Final Fantasy VII when called; Seal Evil and Planet Protector, along with Cure and the ultimate white magic spell, Holy.

In an interview with Dengeki magazine, the Dissidia 012 developers explained they chose Aerith to include as an Assist-only character based on her fan popularity in a Square Enix website member poll, and her lack of offensive abilities would not be a concern if she was only an Assist. Since Prologus is a paid demo, the developers gave Aerith's attacks unique properties that other characters' attacks do not have, such as paralyzing the opponent or granting the player invincibility, to make using her worthwhile.

Unused data indicates Aerith may have at one point been planned to be fully playable—the game contains a listing of what equipment types she can equip, her moves have AP costs tied to them, and the game's object list includes contains three empty data slots that ought to be where data for Aerith as a playable character in each of her outfits would go. Through hacking it is possible to select her as a character in Quick Battle, and she will have her name displayed as normal in the menus, but she lacks many animations in battle and her attacks are prone to glitching.

Aerith has a chance to be used by AI opponents in Quick Battle and Labyrinth, but only if the player downloaded her Assist data and purchased Prologus, and will always use her default appearance unless the player's Assist is also Aerith in her default attire, in which case the computer will switch to her first alternate outfit. Under no circumstances however can Aerith be set as an Assist in a storyline or in the Labyrinth. In the Arcade Mode, she is only selectable if the player chooses to fight with custom characters.

On the Assist selection screen, Aerith's last name is spelled "Gainborough", dropping the S. It is spelled correctly in the credits and in the Japanese game

Aerith and Lightning share the same voice actress in the Japanese version. As a reference to this, the unique trade accessory won by completing Prologus, the Midgar Flower, can be traded for an exclusive weapon for Lightning when transferred to Dissidia 012.