Aerith is first and foremost a White Mage, with numerous healing Soul Breaks. With 209 Mind at Level 99, she ties with Rosa and Deuce for the 15th-highest Mind stat in the game. This makes Aerith a very effective healer, and with a total of eight Soul Break Relics that all increase her Mind upon mastery, she could potentially have one of the highest Mind stats in the game if the player can amass many relics for her. As a healer, she is without peer among the VII cast. She is also the only VII character with access to Rank 5 Summoning. Beyond this her skillset is very limited; as an offensive mage she is outmatched by Vincent, who has a larger pool of offensive abilities and higher Attack and Magic to use them with, and as a supporter she is rivalled by Cait Sith, who has Rank 5 Bard and Dance and various debuffing Soul Breaks. 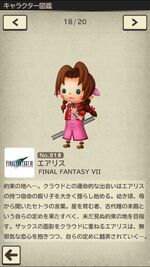 Retrieved from "https://finalfantasy.fandom.com/wiki/Aerith_Gainsborough/Other_appearances?oldid=2774043"
Community content is available under CC-BY-SA unless otherwise noted.