Princess Guard
Aeris is a playable character in Final Fantasy VII. She serves as the party's White Mage with the best Magic stats in the game, and the ability to heal and support the party with her Limit Breaks. She wields a rod, but her strength lies in her magic use.

Aeris is also a date option for a scene in Gold Saucer, and is considered the default date as she starts with the highest compatibility with Cloud Strife.

Aeris lacks in physical stats, but makes up for it with her high magical stats. When she joins the party she is in the back row by default. She is a good spell caster and her Limit Breaks are supportive rather than damage-dealing. Aeris's victory pose is to brush down her clothes, smooth back her hair, and bow with her hand over her heart.

Her starting level is decided by the following formula:

The playable characters require slightly different amounts of EXP to reach level 99. Aeris requires the most EXP for level 99: 2,484,643. 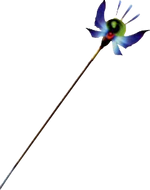 Aeris joins the party with the Guard Stick and a Bronze Bangle. Guard Stick can be replaced very quickly, and she can obtain the Striking Staff by stealing it from Eligor at the Train Graveyard, making it the most powerful weapon any character can obtain at this point in the game. Aeris wields various rods and staves that often have many Materia slots and boost her Magic stat. Due to this, coupled with her naturally strong Magic stat and magic-based Limits, she is most suitable for wielding Magic and Summon Materia.

One of her weapons, the Fairy Tale, can be acquired in Gongaga and has seven Materia slots, the most of any weapon up to that point and for some time after. Her joke weapon is the Umbrella, won from the Speed Square at Gold Saucer.

As Aeris permanently leaves the party after Temple of the Ancients, her combat abilities are limited in comparison to the other party members who can acquire stronger weapons later.

Aeris is the only character whose ultimate weapon, Princess Guard, has normal Materia growth, and seven Materia slots. The weapon functions like Cloud's Yoshiyuki, increasing in attack power proportional to the numbers of KO'd allies.

When Aeris leaves the party at the end of Temple of the Ancients, the player loses the weapon and armor she was equipped with, but gets back her equipped accessory and Materia. It is possible to open the menu after the Demons Gate battle during the scene Cloud lunges at Aeris at the bottom of the pit, and change her equipment.

Aeris's Limit Breaks revolve around healing and buffing the party, most of them restoring HP and curing status ailments. Aeris's ultimate Limit Break is Great Gospel, which fully heals the party and makes them temporarily invincible. Aeris's Limits must be taught to her before reaching the end of the Temple of the Ancients.

Breath of the Earth.

Due to Aeris's naturally high Magic stat, and weapons that have many Materia slots and high boosts to her Magic, equipping her with Magic and Summon Materia is ideal. When she first joins the party, she is best off equipping an offensive Magic Materia in her only slot because her offensive potential is generally low, meaning a Magic Materia is ideal to compensate, and also because her Limits provide her with healing anyway.

As the game progresses, Aeris is still ideal for equipping offensive Magic and Summon Materia, though equipping healing Materia can also be useful on her to heal party members when her Limits are not active. She can take advantage of many Support Materia on linked slots, especially All to allow her magic to target multiple enemies or allies. Because she equips so many Materia, HP Plus is a useful Independent Materia on her unlinked slots. In general, most Command Materia is wasted on her, though the Enemy Skill Materia can be useful to take advantage of her high Magic stat when casting enemy skills.

Aeris in her Wall Market dress.

Aeris is first encountered as the flower girl during "No. 1 Reactor Bombing", found in Sector 8 after Cloud destroys the No. 1 Reactor. Aeris will sell a flower to Cloud for 1 gil if he answers correctly, by choosing the following inputs:

If Cloud buys a flower, it can be used to affect date mechanics with Tifa or Barret.

The party member who takes Cloud Strife on a date during the party's second plot-related visit to Gold Saucer is decided by a hidden value in the game determined by the player's dialogue and party member choices. Depending on the player's choices, Cloud may go on a date with Aeris, Tifa, Yuffie, or even Barret.

How each character is chosen is based upon a hidden value in the game's code, which cannot be viewed without hacking. Aeris starts with the highest value, at 50, and is thus considered the default date option.

If the party Cloud chooses when exiting Midgar features Barret and Red XIII, Aeris and Tifa will comment on the combination.[1]

If Aeris is in the party in the Mythril Mine scene wit the Turks, Aeris has an additional back and forth with Tseng.

Those not in the party Cloud picks in Costa del Sol will each make a comment and run off. Aeris's response is more substantial, saying she is thinking about going tanning and asking Cloud what he thinks about the tanned look. If Tifa and Aeris are both not in the party then Aeris will agree with Tifa's idea to go swimming, and then comment on Cloud's reaction to this.

When talking to the parents in Zack's Home in Gongaga, if Aeris is in the party they will ask her if she was the girlfriend their son wrote to them about. She will deny it, leave, and then be found in town for an additional scene.