The Aerbs Mountains are a geographical formation in Final Fantasy IX. Located on the planet of Gaia, the mountains are a long chain of branching peaks on the Mist Continent. Their altitude effectively separates the continent into three distinct areas of flatland, each ruled by a different kingdom: Alexandria in the northeast, Burmecia in the northwest, and Lindblum in the south.

In order to make trade convenient between the three countries, several methods of transportation have been erected along the mountains. There are various foot gates on either side of the peaks, allowing people to reach the system of cable cars created to surmount the soaring mountains. In addition, two airship gates serve as a checkpoint to inspect airships traversing the three countries.

In the third disc of the game, the player is able to revisit these areas. The cable cars, however, no longer work due to the absence of mist, thanks to the defeat of the SoulCage at the Iifa Tree. On disc 4, all areas of the Aerbs Mountains are blocked by Iifa roots, rendering them inaccessible.

Bohden Gate is Lindblum's foot passageway to the Aerbs Mountains. It is here that Garnet and Steiner flee to after making their escape from Lindblum. Steiner is forced to hide Garnet in a burlap sack in order to avoid recognition by the Lindblum guards flanking the entrance to the gate, aided by the repulsive odor of Gysahl Pickles. Once past the guards, Garnet is able to come out of hiding, and the pair board the cable car to the mountain crest.

This area can be returned to in disc 3 and the player can open a treasure chest containing an Elixir card at the top of the ladder that Steiner was unable to open due to the heavy load he was carrying.

This airship gate regulates trade between Alexandria and Burmecia. No storyline events occur here, as peaceful relations between the two countries were nonexistent by the time Zidane and his crew reach Burmecia. Both airship gate and foot gate are locked when the party examines the area, though Freya notes the smoke rising from behind the huge blocked double doors, probably the site of a black mage rout of the defending Burmecians.

South Gate allows travel, both via airship and on foot, between the territories of Alexandria and Lindblum.

South Gate is first accessible after the party ventures out on to the World Map, after leaving the Ice Cavern. Although the guards will not open it without a Gate Pass, it is possible to buy items. After speaking with the guards several times and going through all of their options at least once, Part-time Worker Mary will appear and ask the group if they would like to stock up on medicine.

The South Gate next appears in an FMV where Zidane, Garnet, Vivi, and Steiner are piloting the Cargo Ship in an attempt to reach Lindblum. Black Waltz No. 3 attacks from Zorn and Thorn's small airship, and Zidane leaves Garnet to decide whether to fly through the Gate to Lindblum or turn back to Alexandria. Garnet decides to go through the gate, which begins to close on them and the Black Waltz. As the two airships fly through the interior of the gate, the Black Waltz sets his own airship on fire with an erratic Thunder spell, causing it to explode and damage the South Gate. The Cargo Ship makes it through, carrying its passengers to Castle Lindblum. 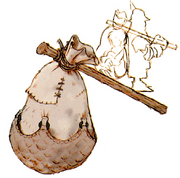 Steiner and Garnet arrive at South Gate after their escape from Lindblum in order to cross the border between the regency and Alexandria. Steiner is forced to sneak in the princess by hiding her in a sack filled with Gysahl Pickles in order to avoid detection by the guards. Comically, the guards pass up the regulatory inspection of Steiner's belongings because of the putrid smell of the pickles. Once their past the guards, and after obtaining a Gate Pass, Steiner and the Princess board the cable car bound to Summit Station.

Summit Station fittingly lies at the apex of the Aerbs Mountains. This is the midpoint between Lindblum and Alexandria, where the two cable cars take turns docking. The rest area here holds several shops and a save moogle, and the local cafe is famous for its bundt cake.

Steiner and Garnet get off the Lindblum cable car and meet Marcus, who plans to go on to Alexandria, and Cinna, who plans go head back to Lindblum. Steiner makes a fuss and tries to prevent Garnet from talking with the Tantalus Theater Troupe members, but she merely "scolds him." Marcus goes on with Steiner and Garnet to Alexandria, in order to collect the Supersoft from Treno. Along the way, the cable car stops in order to avoid a collision with a battered Black Waltz No. 3, who is heavily damaged and is defeated again by the party. The cable car resumes its journey.

DO NOT VANDALIZE THE FARM!

The Alexandrian station contains a small item shop and paths to the two hamlets under the control of Alexandria; Treno, and the previously visited Dali. Here, several markers and statues are erected in honor of Regent Cid VIII, the former leader of Lindblum who designed the cable car system in order to foster a friendship with Alexandria. Steiner, Garnet, and Marcus must head to Treno in order to continue the storyline.

Template:Listen "At the South Gate Border" is the music that plays here. It is an arrangement of the world map music "Over the Hill."

The sign for Lindblum at Summit Station is misspelled as "Lindbulm."

Retrieved from "https://finalfantasy.fandom.com/wiki/Aerbs_Mountains?oldid=1256726"
Community content is available under CC-BY-SA unless otherwise noted.