The Aerbs Mountains are a geographical formation in Final Fantasy IX. Located on the planet of Gaia, the mountains are a long chain of branching peaks on the Mist Continent. Their altitude effectively separates the continent into three distinct areas of flatland, each ruled by a different kingdom: Alexandria in the northeast, Burmecia in the northwest, and Lindblum in the south.

To make trade convenient between the three countries, several methods of transportation have been erected along the mountains. There are various foot gates on either side of the peaks, allowing people to reach the system of cable cars. Two airship gates serve as a checkpoint to inspect airships traversing the three countries.

After the player has acquired the Blue Narciss, they can revisit these areas, but the cable cars no longer work due to the absence of Mist. After the player has the Invincible, all areas of the Aerbs Mountains are blocked by Iifa Tree roots, rendering them inaccessible. Part-time Worker Mary, who retreats to Dali after the Aerbs Mountains become inaccessible, says that the whole South Gate was destroyed when the Iifa roots broke through the ground to release Mist.

North Gate is the airship gate that regulates trade between Alexandria and Burmecia. It has two lower gates on either side: the Melda Arch that lies on the Alexandrian side, and the Burmecian Arch on the opposite side. Both are blocked to the player since no storyline events occur at North Gate, as peaceful relations between the two countries were nonexistent by the time the player party comes across them. Though the player never visits North Gate, it has a similar design to South Gate, minus the Berkmea Cable Cars that operate at South Gate. North Gate becomes inaccessible in disc 4 due to Iifa roots blocking the entrances.

The player can enter the Melda Arch once Zidane, Vivi, Steiner, and Garnet escape from Evil Forest. Steiner comments that the Alexandrian war flag is flying from the gate, and Zidane notes the fresh footprints outside the gate, as well as the rising smoke and the sound of voices and metal work from the other side.

The party cannot investigate further due to traveling with Garnet; however, Zidane can buy Potions from a woman behind the gate. Later, it becomes clear they had encountered the Alexandrian Army on its way to Burmecia before the imminent invasion.

Zidane, Vivi, Freya, and optionally Quina, arrive at the Burmecian Arch once they reach the other side of the mountains on their way to Burmecia. Freya notes the smoke rising from there as well and the smell of blood, most likely the result of the conflict between Alexandria and Burmecia. A rainbow can be seen as a one-time event here at any point between obtaining the Blue Narciss and going through the Shimmering Island.

South Gate allows travel, both via airship and on foot, between the territories of Alexandria and Lindblum.

South Gate appears in an FMV where Zidane, Garnet, Vivi, and Steiner pilot the cargo ship to reach Lindblum. Black Waltz 3 attacks the airship, and Zidane leaves Garnet to decide whether to fly through the Gate to Lindblum or turn back to Alexandria.

Garnet decides to go through the gate, which begins to close on them and the Black Waltz. As the two airships fly through the interior, the Black Waltz sets his airship on fire with an erratic Thunder spell, causing it to explode and damage South Gate. The cargo ship makes it through, carrying its passengers to Lindblum Castle.

Steiner must hide Garnet in a burlap sack full of Gysahl Pickles to avoid recognition by the Lindblum guards flanking the entrance to the gate, aided by the pickles' repulsive odor.

There is a hard-to-see treasure chest containing a Multina Racket in the far left of the screen near the broken gate with workmen, obscured by a barrel.

Once past the guards, Garnet comes out of hiding, and the pair boards the cable car to the mountain crest.

This area can be revisited when the player can traverse the seas with the Blue Narciss, and the player can open a treasure chest containing an Elixir card at the top of the ladder that Steiner was unable to open due to the heavy load he was carrying. Tantalus Theater Troupe also stayed here as seen in an Active Time Event, and Cinna made coffee with the water from the healing spring; the coffee beans can be collected for Morrid.

Summit Station, also known as Aerbs Peak Station, lies at the apex. This is the midpoint between the Aerbs Lindblum Station in Lindblum and Aerbs Alexandria Station (leading to the Dali and Treno Gates in Alexandria), where the two cable cars take turns docking. Its rest area holds several shops and a save moogle, and the local cafe is famous for its bundt cake.

Steiner and Garnet get off the Lindblum cable car and meet Marcus from Tantalus Theater Troupe, who plans to continue to Alexandria, and Cinna, who plans to head back to Lindblum. Steiner makes a fuss and tries to prevent Garnet from talking with the two, but she scolds him. Marcus accompanies Steiner and Garnet to Alexandria to collect a Supersoft from Treno to save his friend Blank who was petrified back in the Evil Forest. Along the way, the cable car stops to avoid a collision with a battered Black Waltz 3 who is still trying to kidnap Garnet. He is defeated by Garnet's party and the cable car resumes its journey.

Because Summit Station is only accessible by cable car in either direction and has no airship or chocobo access, it is an unrevisitable location by disc 3 when the Mist is gone.

DO NOT VANDALIZE THE FARM!

The Alexandrian station contains a small item shop and paths to the two locations under the control of Alexandria—the city of Treno and the hamlet Dali. Several markers and statues are erected here in honor of Regent Cid VIII, the former leader of Lindblum who designed the cable car system to foster a friendship with Alexandria. Steiner, Garnet, and Marcus must head to Treno in their quest for Blank's medicine.

Although geographically in Alexandria, the Treno Gate is guarded by Lindblum soldiers.

The first of the set, Moccha Coffee, can be found at Bohden Gate in the King Ed Plains and can be found as early as disc 1. The player will see an ATE earlier in the game where Tantalus visits South Gate, and Cinna makes the coffee.

Grimo at Boden Station sends a letter to Nazna at the South Gate resting area:

The letter the party delivers from Grimo to Nazna:

Nazna from the resting area sends a letter to Mochos in the Gargan Roo.

"At the South Gate Border"

"At the South Gate Border" plays here. It is an arrangement of the world map theme, "Over the Hill".

Defeat the Black Waltz 3 without being KO'd.

The sign at the Summit Station spells Lindblum as "Lindbulm". This was not a spelling or translation error, but the original Japanese name of the city.

Although the cable car system is supposed to work on pulleys, with one car being at the top of the mountain while the other is at the bottom, both cars can be found at the bottom of their respective stations when the Mist clears on disc 3.

During the first interlude in South Gate, the shop near the cable car is named Altair, which shares its name with the town the Wild Rose Rebellion fled to at the start of Final Fantasy II. The name "Altair" was implemented to juxtapose the item shop in the northern station of South Gate named "Vega", which is a reference to the Tanabata legend in Chinese-originated Japanese folklore. The stars Orihime (Vega) and Hikoboshi (Altair) are lovers separated by a river of stars (Milky Way). They are forced to meet only once a year on the seventh day of the seventh month. In Final Fantasy IX, the Aerbs Mountains seem to obstruct them and their lovesick owners. This relationship is the subject of the Mognet letter Grimo asks to deliver to Nanza. 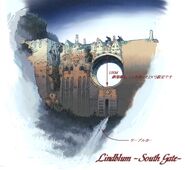 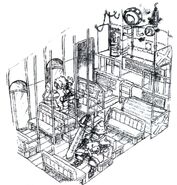 Concept artwork of the interior of the Berkmea cable car. 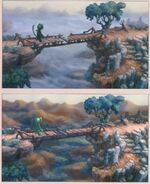 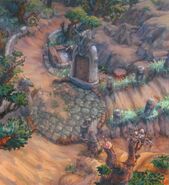 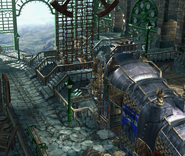 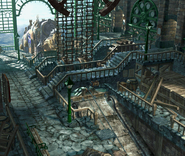 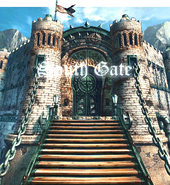 Back alley in Bohden Gate. 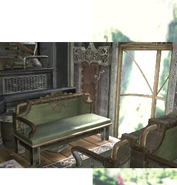 Inside a cable car.

Gate near Dali, on top of the mountain. 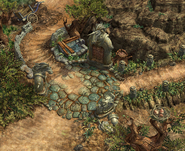 Gate at the bottom of the mountain, Bohden Arch. 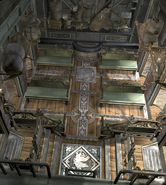 Inside of South Gate.