Cid Pollendina: Oh, shut up and help me remodel the Aemo page!
Please expand this article into a full one. The following tasks need to be completed:This request can be discussed on the associated discussion page. Remove this notice upon completion.

Aemo is one of the six main protagonists of Final Fantasy Dimensions II. She is a mysterious girl from the future who has lost her memories. She befriends Morrow after she emerges from the meteorite impact near his village.

Aemo is a tall, slender woman with long auburn hair that reaches her mid-back. She wears a teal and white dress that hangs lower in the back and teal and white toeless boots. She has a dark blue oversized necklace, bracelet on her left wrist, and anklet on her right ankle.

In the original version, she had shoulder-length auburn hair with bangs. She wore a teal minidress with white V-shaped décolletage shirt that had a long white sleeve covering her right arm. On her left wrist she wore an oversized blue bangle. There are brown and silver straps on her forearm and she had dark blue collar and a light brown adornment attached on the ornament's front. Aemo wore light brown and white heel-less and toeless socks, and on her left ankle a dark blue anklet with light blue ornament and a brown adornment hanging from it.

She is later revealed to have come from 2499 AC. She is one of the few remaining humans on earth after the impact of "Judgement Day", which nearly wiped out all the humans in the planet. She joins Morrow's party later, striving to change the devastating future that will take place.

Following the 2017 release, Aemo has exclusive access to the following signets and abilities:

Aemo appears as an obtainable unit.

A girl from a future that was destroyed by a mysterious meteorite. Though she survived the impact, the meteorite still left a mark on her robbing her of her memories, and even now she struggles to express her emotions. However, in time she forges new connections and rediscovers who she is.

Aemo appears as a playable character who could be initially recruited during the Collector's Event Bonds Across Time as a First Time Reward for completing the event's Navos Forest (Easy) stage.

Aemo appeared as part of the Final Fantasy collaboration. She was first introduced in the collaboration event that happened in the North American version from November 2, 2016 to November 15, 2016. 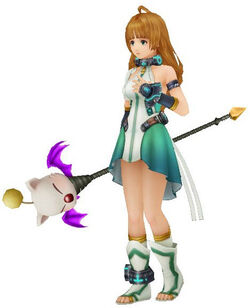