Various
The aegyl are a race of winged humanoids who live on a sky continent on the skies of Ivalice in Final Fantasy XII: Revenant Wings. 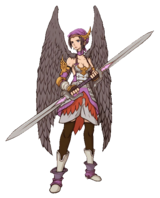 The aegyl resemble humes, except they have large wings on their back that can come in different colors, from brown to red to black. The wings allow the aegyl to fly, but the strain they put on their body means they have the shortest life span of any race in Ivalice, with an average lifespan of forty years.

All aegyl, including Llyud, are cold and aloof. They are either incapable at showing emotions, or do not feel them at all. This is due to their use of auracite to summon the Yarhi and the sapping of their anima that results.

The aegyl are not keen on other races, since most of the sky pirates arriving from Ivalice either attacked or enslaved them. This was also in part due to their leader Feolthanos and his dislike of all the other races.

Though the aegyl are a social people, they cluster among the ruins of their ancestors rather than build structures anew, their humility evident even in this.

Aegyl make their home in many stone edifices erected over several of Lemurés's continents. These homes were built by the first generation of aegyl to reach Lemurés following their banishment by the Occuria. Successive generations have elected to inhabit the century-old dwellings rather than construct new ones, an effort made easier by the small aegyl population.

From what the player can determine from the world map, there are several clusters of stone buildings on every island of Lemurés barring Tswarra, Isle of the Lost. This is because the aegyl only inhabit places deemed "right and proper" in the Canon. One of these major aegyl gatherings is Heaven's Vigil, a city of stone resplendent with windmills and a breathtaking view over the endless skies surrounding the isle of Arda.

The aegyl have built temples to enshrine geological formations that are sacred to them.

These buildings are called "Fanes", and four exist in Lemurés:

According to the Folio, aegyl are mostly vegetarians, the majority of their diet being wild fruits and vegetables. The Damson, a plump red fruit that grows in the Bosco Pampa, appears to be their favorite. Aegyl harvest the waters of Lemurés for native fish, and eggs are also a part of their cuisine. Other hunting sources are nonexistent, as the Yarhi beasts that would normally yield meat are but illusions, and fade to nothing when killed.

Since the climate of Lemurés is mostly tropical, aegyl garb is light and geared for flight. Most aegyl males do not wear an upper garment, and aegyl armor is sparsely distributed over the aegyl form. As Llyud exemplifies, aegyl jewelry is simplistic, being of lightweight gold and lacking in inlaid jewels. This absence of exquisite garments is yet another indication of aegyl humility.

Aegyl have been geared for war against the native Yarhi of Lemurés thanks to their god Feolthanos. All aegyl are Flying units, and they wield various metallic weapons geared for close-range combat. Aegyl abilities exclude magicks common in Ivalice, such as Firaga or Cure. Instead, aegyl use their unique powers to substitute for these effects, such as the Dragon Knight's Fire Breath and Dragonmend.

Thousands of years before the events of Final Fantasy XII: Revenant Wings, the aegyl were simply another race inhabiting the world of Ivalice. However, they and their leader Feolthanos refused to serve and worship the Occuria, the self-styled gods of Ivalice. Feolthanos used this opportunity to lead his people in an exodus to the skies, settling in a number of floating islands and naming their new home Lemurés.

Outraged, the Occuria used the power of the skystone to create a barrier around Lemurés, effectively locking the aegyl within their newly christened world. Thus did the history and memories of the aegyl fade into Ivalice's legends.

You are now a people of the clouds. Leave all thoughts of the underworld behind - they need not burden you. Your place is here, in Lemurés, and no other. Stray not from the Canon, and the cup of peace shall ever be full for you.

After alighting upon the fields of Lemurés, Feolthanos created a doctrine for the aegyl to follow, called The Canon. Because of the circumstances upon which the aegyl had been made to flee Ivalice, Feolthanos's writings discouraged contact or inquiry about their former homeland. The aegyl began to refer to Ivalice as the "Underworld".

Now sealed from the land below, Feolthanos began constructing a society that would sustain his people. He erected three Auraliths throughout the isles, which served as sources of power for the aegyl. One of these, hidden in the Keep of Forgotten Time, was bound to Feolthanos, effectively giving him eternal life. The other aegyl were oblivious to the way Feolthanos chained himself to the Auralith, and the method in which he obtained his perpetual life, which concerned the summoning of beings known as the Yarhi.

The aegyl are no illusions. We do not vanish with the breaking of dawn.

From the Auraliths, Feolthanos gave his people auracite, magickal stones that allowed the aegyl to call forth beings from the world of illusion, known as Yarhi. These entities took on a variety of forms and could only be called from a Summoning Gate using auracite. What the aegyl did not know was that whenever someone uses auracite to summon, a part of their anima, or soul, is taken into the World of Illusion and also into the body of their god, Feolthanos.

Something is amiss. Strange tidings since the auracite came. Though the bitter wars are ended, there is an undeniable sense that something irreplaceable has been taken from us. Feolthanos, what have you done?

Testimony of a Heretic

The aegyl leader kept this effect hidden from his subjects, but as time wore on, most of the aegyl continued to summon Yarhi for protection from Lemurés's wild beasts. In time, the anima became tainted and deformed into monsters, who then attack the aegyl, who in turn summon more Yarhi to protect themselves at the cost of their anima. This circle continues until the aegyl have no anima left, turning them into the emotionless people they are now.

The aegyl's anima was eventually lost completely to the Auraliths, sustaining the watchful form of Feolthanos. This process continued on through the centuries, Feolthanos growing stronger with every Yarhi summoned, but unable to use this power as Lemurés remained isolated from the world of Ivalice.

The Mist released from the Sun-Cryst removed the Occurian barrier, meaning people from the outside world could visit the aegyl. A flood of sky pirates make landfall on the floating isles, including Vaan and his friends via the Galbana. Most of the sky pirates had alighted upon Lemurés only to search and take its treasure, but Vaan, Penelo, Filo, and Kytes join up with the aegyl Llyud to help keep the pirates at bay.

The group can only do so much, and on far away islands some sky pirates began to make aegyl their slaves to dig up more treasure. A battle at the Kisne Rise between Vaan and several sky pirates ensues, freeing many aegyl who are invited to stay on the Galbana.

The sky pirates' invasion sparks anger and distrust in the aegyl, emotions that had been absent for quite some time due to Feolthanos sapping the aegyl of their anima. Aegyl forces group together in several of their holy places to repel the intruders, not bothering to discriminate benevolent outsiders, such as Vaan, between the ruthless sky pirates.

The rage is amplified upon the second Auralith's destruction in the Ymir Qul Underground which releases a large amount of stolen aegyl anima. With part of their souls returned, many aegyl's first impulses are of vengeance, and they band together to attack the land of Ivalice. The Galbana interrupts their journey, and Vaan's party halts the aegyl advancement and helps teach the aegyl leaders not all from the "underworld" bear them ill will.

One of the Wonders in Final Fantasy Tactics mentions winged men once existed in Ivalice and knew how to build floating castles:

The winged ones possessed technology allowing them to transmute cloudstone into crystals, like the ones that keep this castle aloft. Unfortunately, both the winged ones and their wondrous knowledge were lost in the Cataclysm.

One of the scrapped playable character ideas for Final Fantasy XII: Revenant Wings was a ninja aegyl who was supposed to be the last survivor of his village. The character was scrapped as the game's co-director, Takanari Ishiyama, felt that there would have been too many playable characters.[1]