Adventurer (The 4 Heroes of Light)

I'm nothing but a simple adventurer who travels the world seeking new places to visit. The fox here is my faithful companion.

Adventurer in Final Fantasy: The 4 Heroes of Light

The Adventurer is a character from Final Fantasy: The 4 Heroes of Light, and also the Bravely series. The Adventurer is a traveler with a fox for a companion who appears to not be human, such as being unaffected by the magic of Arbor that keeps normal humans from entering freely and seemingly appearing in other dimensions. The Adventurer mainly allows Brandt and the others to record their adventures when they talk to her.

The Adventurer appears to have brown hair, but in fact has long silver hair and yellow eyes. She wears a red jacket with a blue sash around her waist and a disheveled red hat. Her head and lower face is covered in a brown scarf. She wears brown fingerless gloves. She has light purple boots and a large tan backpack with a sleeping bag wrapped up on top. She carries a sword in a blue sheath.

The Adventurer mainly acts as a save point, but the Adventurer and the Faithful Fox are also fought as bosses inside the Trial Tower.

The Adventurer allows the player to save the game while in towns or dungeons and sells restorative items and rare equipment from village. The variety of items is limited at first, but grows as the player rebuilds the village. She also gives the player access to bots, computer players that can be used for Friend Summons or Abilinking, with a maximum of four bots. The bots will update at regular intervals upon speaking to the Adventurer. The Adventurer and the Comrade appear as hidden bosses. To find them, the player needs to go through the wall behind the treasure chest that holds Durandal in the last floor of Dimension's Hasp.

The Adventurer allows the player to save the game, buy items from Fort-Lune, and access multiplayer features. In certain areas, the Adventurer will give the player the option to stay in a cottage and heal their party.

In the final moments of the game, the Adventurer aids in reviving a dying Tiz by taking Magnolia's hourglass back in time, appearing as the figure in the green-outfit that Tiz met at the start of his first adventure. Over the course of Bravely Default, Tiz unknowingly fills the hourglass with the wishes, dreams, and desires of himself and everyone he ever met, enabling it to save his life by the time he needed it. As Agnès races to Tiz's side with the hourglass that has been in her possession, the Adventurer reveals her identity as a woman named Deneb and bids the party farewell.

Apparently, she's an old friend of Altair and Vega.

The Adventurer and the Comrade appear as hidden bosses in a two-phase fight. They can be found at the end of Dimension's Cauldron. 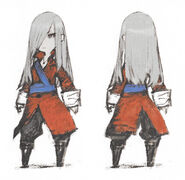 Concept art of the Adventurer unmasked.

The Adventurer's shop in Bravely Second.

The Adventurer is an obtainable unit.

The Adventurer and the Comrade appear as bosses and as the final character dungeon. She has a 5% chance of dropping the Mark of The Adventurer.

It is revealed in chapter 40 that Daria's true identity is Deneb.

In Fantasy Earth Zero, the Adventurer's costume appeared in a collaboration event.[1]

In-game model of the Adventurer.

The banner announcement art from the Bravely Archive Offical Twitter.

[view · edit · purge]An adventurer is someone who undertakes into the unknown, often having a connotation of danger and excitement.

Deneb is also referred as the bridge between Vega and Altair in the Tanabata lore. In a few representations of this story, for the young lovers to meet, crows and ravens flocked to their aid. By piling themselves over one another to create a bridge to link the two flooded shores, the two lovers are finally able to meet.

Deneb's use of a fox as a companion may allude to the constellation Vulpecula, which sits at the center of the summer triangle.