I am the totema Adrammalech! By my strength, I shall defend the world-thread... And destroy all those who seek to harm it!

The Adrammelech is the totema of the bangaa in Final Fantasy Tactics Advance. It is the third totema fought by Marche Radiuju, at Nargai Cave. After being defeated, Adrammelech can be summoned by a bangaa member of Clan Nutsy. A Deph clone of Adrammelech also appears during the fight with Queen Remedi in her Battle Queen form.

As Adrammelech is the totema of the bangaa race, he possesses two abilities of the bangaa job Templar: Soul Sphere and Warcry (renamed Howl of Rage.) Adrammelech is designed after Dycedarg Beoulve's Lucavi demon form of the same name with more of a draconic appearance.

Adrammelech is accompanied by a Firewyrm on his right, a Thundrake on his left, and an Icedrake in front of him. The player will most likely need to kill off at least the Icedrake to reach Adrammelech. On the totema's first turn, he will most likely use his Firestream spell to hit the party from afar. This, coupled with one of the Dragons' Breath attacks, can KO a group of tightly-clumped units.

The key is to space units out enough so that one Breath attack cannot hit more than two units at once. Players should take down the Thundrake on their first turn, and have any leftover units aim spells at Adrammelech. If one's units are sparsely grouped, the remaining enemies should not be able to KO more than one of Marche's allies. The player may then use the next turn to focus on Adrammelech. Summoning Famfrit may be helpful. Having many ranged units, or units that can hit at a far range, is also valuable. If this doesn't help, having one of the laws forbid fire can also simplify matters.

As a boss, Adrammelech has substantially higher stat growth than normal, playable jobs. He possesses the highest Magic Power and Speed of all totema, though the latter is still quite low. With the exception of MP, all of his other stats are tremendously above-average, making him more than match for an entire clan.

Adrammelech, the Wroth appears with a Lightning-elemental card. 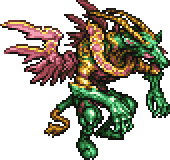 This section about an enemy in Final Fantasy Record Keeper is empty or needs to be expanded. You can help the Final Fantasy Wiki by expanding it.
Final Fantasy Tactics Advance characters
Deutsch Español
Community content is available under CC-BY-SA unless otherwise noted.
Advertisement