Defeated as a boss, then license purchased on License Board (costs 25 LP)

Adrammelech, the Wroth is an optional level one Esper in Final Fantasy XII. He is fought in the middle of the Zertinan Caverns and can be unlocked once defeated. His attacks are Lightning-based.

Adrammelech is associated with the element of Lightning, and is an optional Esper. He has a dragon-like form with a goat-like head and the cloven hooves. Due to his power over thunder, his color sign is yellow. Adrammelech is also referred to as the Makara Ascendant, the Sanskrit name of its zodiac sign as used in Jyotish (Hindu) astrology.

Adrammelech is fought as an optional boss in the middle of the Zertinan Caverns and summons several undead to aid him during the fight. Once defeated, Adrammelech's license can be purchased for 25 LP.

Esper licenses sometimes unlock licenses that could not otherwise be reached. Adrammelech's license will appear on all boards, but once chosen by a character, will disappear from all other boards. In The Zodiac Age version, the player can choose two license boards for each playable character, and activated licenses are activated on both boards if present.

Adrammelech allows access to the following licenses on these boards: 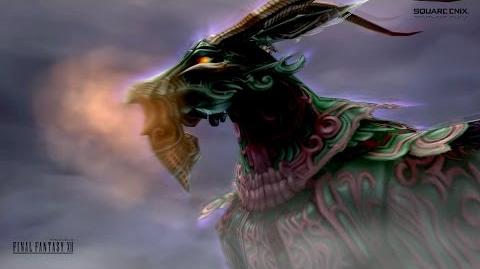 A Lightning-elemental attack. It is like the standard higher level Thunder spell. Its power is boosted in the Zodiac releases.

A Lightning-elemental attack, and Adrammelech's ultimate attack. Spiraling upwards, in high-speed flight, Adrammelech suffuses his body with electrical energy. The clouds surrounding Adrammelech darken and he unleashes bolts of lightning from his body, sundering the ground around the enemy. A blast of lightning strikes the enemy, sending debris flying into the air.

Adrammelech absorbs Lightning but is weak against Ice, nullifying damage from any other elements. Though a flying opponent when he is fought as a boss, he is not aerial when summoned.

Adrammelech is a boss fought in the Zertinan Caverns in the Athroza Quicksands. It is also fought in the Zodiac versions at stage 35 of the Trial Mode along with two Skulwyrms. It is the only Esper the player can farm High Arcana from, since the party can flee one screen during the battle, then return and steal again. One does not need to possess the Canopic Jar to make the High Arcanas available. Adrammelech resists all elements but Ice that he is weak to. He is a flying opponent. As soon as the player steps into the area, Shambling Corpses will emerge out of the ground and will keep on spawning. Adrammelech has powerful Lightning-type spells, and its Thundaja can be deadly. Adrammelech can also use Bleed. In HP Critical it will use Thundaja regardless of any action taken. If this attack does not KO the party, he will use Perfect Defense, which negates all physical and magickal attacks for a time. 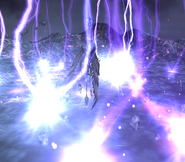 [view · edit · purge]Adramelech was a god called Baal Adramelech (Baal means "Lord" and melech means "King" in Hebrew) in Assyrian mythology. It is said that children were sacrificed to him, but Greek accounts saying that child sacrifice via burning them or placing them within a heated bronze statue of the god are not historically verifiable, as no archaeological proof of such a large, bronze statue exists.

Adramelech is considered a demon in Judeo-Christian tradition, being generally depicted with a human torso and head, and the rest of the body of a mule, a peacock, or some combination there of. He was described as "The enemy of God, greater in ambition, guile and mischief than Satan. A fiend more cursed — a deeper hypocrite".

Adrammelech is also referred to as the Makara Ascendant, the Sanskrit name of its zodiac sign as used in Jyotish (Hindu) astrology.