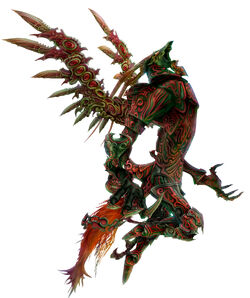 (Adrammelech, the Wroth, 憤怒の霊帝アドラメレク?, lit. Fun'nu no Reitei Adoramereku) is the name of a recurring creature in Ivalice. Appearing as a large winged monster with horns, he has been both a Summon and one of the Lucavi, and is always associated the sign Capricorn.

Template:Enemy Adrammelech is associated with the element of Lightning, and is an optional Esper in Final Fantasy XII. Despite his dragon-like form, there are several parts in relevance to a goat, most notably his goat-like head and the cloven hooves on his feet. Due to his power over Thunder, his color sign is Yellow. Adrammelech is also referred to as the Makara Ascendant, which is the Sanskrit name of its Zodiac sign as used in Jyotish (Hindu) astrology.

He is fought in the middle of the Zertinan Caverns and summons several undead to aid him during the fight. Once defeated, he can be summoned by the player. Adrammelech's standard special attack is Flash Arc, a powerful thunder-elemental attack, and its ultimate attack is Judgment Bolt, which does thunder-elemental damage to all enemies in range.

Judgment Bolt: A Thunder-elemental attack, and Adrammelech's ultimate attack. Spiraling upwards, in high-speed flight, Adrammelech suffuses his body with electrical energy. The clouds surrounding Adrammelech darken. He then unleashes bolts of lightning from his body, sundering the ground around the enemy. This is followed by a blast of lightning striking the enemy directly, sending debris flying into the air.

In Final Fantasy XII International Flash Arc's power has been boosted, but Adrammelech casts Cura instead of Curaga. He has gained the Null Vitality augment.

Adrammelech absorbs Thunder but is weak against Ice, nullifying damage from any other element. Even though Adrammelech is a flying opponent when he is fought as a boss, he is no longer aerial when he is summoned.

Known as "Adrammelech, the Wroth", or "Adramelk, Ghost of Fury", Adrammelech is the fourth Lucavi fought by Ramza.

Template:Spoilers Adrammelech, dormant in the Capricorn Zodiac Stone, takes over Dycedarg Beoulve's body after he is wounded during a battle against his younger brothers Ramza and Zalbaag. Adrammelech then immediately kills Zalbaag and several guards from the Order of the Northern Sky. However, Ramza and his group are able to defeat him. Template:Endspoilers

Template:Enemy Known as "Adrammelech the Furious Departed Emperor", it is the Totema of the bangaa and the third Totema fought by Marche. Once defeated Adrammelech in the dimensional rift, he is available to be summoned.

When summoned, Adrammelech attacks all enemies for massive damage, and is less damaging against bangaas.

Adrammelech can be summoned as a Scion by someone equipped with the Raging Brooch when the Smash Gauge is orange. His Wrath is called Judgement Bolt.

Adramelech was a god called Baal Adramelech ("Baal" means "Lord" and "melech" means "King" in Hebrew) in Assyrian mythology. It is said that children were sacrificed to him. However, Greek accounts saying that child sacrifice via burning them or placing them within a heated bronze statue of the god are not historically verifiable as no archaeological proof of such a large, bronze statue exists.

Adramelech is also considered a demon in Judeo-Christian tradition, being generally depicted with a human torso and head, and the rest of the body of a mule (or sometimes as a peacock). He was described as "The enemy of God, greater in ambition, guile and mischief than Satan. A fiend more curst — a deeper hypocrite".

Retrieved from "https://finalfantasy.fandom.com/wiki/Adrammelech?oldid=1460142"
Community content is available under CC-BY-SA unless otherwise noted.