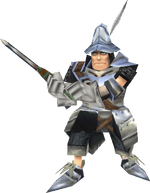 Steiner is a playable character in Final Fantasy IX. His job class echoes the classic Knight, and his secondary ability is reminiscent of the Mystic Knight class. Steiner's HP and Defense are the highest of any party member, and he is an ideal front-line fighter. He wields swords and knight swords in battle. His Trance allows him to inflict three times as much damage as usual. Steiner is also fought as a boss. His victory pose is to place his right foot forward and make a scooping motion with his sword, holding it in front of himself. When Steiner is in Alexandria Castle while Zorn and Thorn hold Garnet, he will not pose until he entrusts Zidane and Vivi with her as the three escape the castle.

Steiner learns abilities that enhance his abilities as a physical fighter, such as Accuracy+, Long Reach, MP Attack, and Killer abilities. His also learns Counter and Cover. He doesn't learn any unique abilities.

Steiner's Sword Arts include stat breaks and several powerful attacks, such as Climhazzard and Shock. Due to the Thunder Slash glitch, Steiner's Sword Art skill Thunder Slash has an accuracy of 0%, rendering it rather useless, although with certain equipment the percentage can be raised, and the attack can be used against enemies weak against thunder, such as the Iron Man.

While Vivi is in the party, Steiner can use a version of Sword Magic to enhance his attacks with magical powers, but the kind of magic applied to his sword is directly related to what Black Magic Vivi has learned, i.e. Fire Sword is only available if Vivi knows the Fire spell. Magic Sword only uses Steiner's MP. His Sword Magic is the only way to use Doomsday without it hitting the party as well.

Steiner has strong Strength stat and good HP, but his MP lags behind pure spellcasters, limiting his Swd Mag skillset.

Steiner uses swords and heavy armor in battle. Steiner's ultimate sword, the Excalibur II, is notoriously difficult to obtain due to the strict time limit.

Steiner is fought as a boss three separate times toward the beginning of the game. A mirror version of him is fought in Oeilvert.

Rallying the Knights of Pluto[]

During the performance of I Want to Be Your Canary at the beginning of the game the player has the option to find the Knights of Pluto as Steiner. Locating them all and reporting to Breireicht in the left tower will earn an Elixir.