After an infinite regression we arrived at an answer: the turtle's all the way down.

Adamantoise is a superboss in Final Fantasy XV fought during the Lonely Rumblings in Longwythe hunt. Defeating it gives the Tortoise Toppler achievement/trophy.

Cid will mention Regis once took on the adamantoise, but was not able to finish it off. The Adamantoise Meat the adamantoise sometimes procures can be used to cook Longwythe's Peak, a powerful recipe available in the post game. The Adamantite material it otherwise yields is an excellent elemancy catalyst. The hunt reward is an accessory that gives max (9999) HP to the wearer.

Largest and oldest living creature known to man. Said to have been born at the dawn of time itself, the adamantoise first appears in documents produced circa the advent of the Kingdom of Lucis. According to said records, metal procured from its shell was used in the construction of conduits used to channel the Crystal's power into the Wall around the Crown City.

Noctis receives an emergency call from Cindy, who warns him about a sudden rash of earthquakes rocking the Leide region. The prince and his friends agree to investigate.

To find the adamantoise, the player must use Umbra, the royal vessel, or Chapter Select (Chapter 15) to return to Lucis once the feature is available. Take the Let Sleeping Mountains Lie quest from Cindy at Hammerhead. The quest then takes the party to David Auburnbrie at Longwythe Rest Area, where Noctis alone enters the Crow's Nest Diner to talk to Dino. At the battle site, the party is to talk to Monica to begin the quest in earnest. The quest concludes with the party discovering that the mountain at Longwythe Peak is actually the adamantoise, which they flee from under a timer. If the timer expires in two timed events, the game is over.

The player can now accept the Lonely Rumblings in Longwhythe hunt from Takka at his restaurant at Hammerhead, regardless of the player's hunter rank. After accepting the hunt, which can be repeated, all NPCs disappear, said to be hiding from the rampaging adamantoise. The player can still camp after the adamantoise has been roused, which can affect the camping sequence with its tremors. Attempting to travel in any direction away from the adamantoise will abort the hunt.

After defeating the adamantoise, if the player talks to David Auburnbrie, he will take the player to the Crow's Nest Diner at the nearby Longwythe Rest Area where up to 14 non-playable characters congratulate Noctis's party and yield an Oracle Ascension Coin each. How many people attend depends on how many quest-givers the player has met, though the characters the player has befriended during the main quest are always present. The player needs to accept a quest from the others for them to appear, besides Kimya, who only appears if the player completes all of Dave's quests.

The NPCs who can appear are:

The adamantoise can take a long time to kill due to its 5,264,400 HP. Its attack patterns, mainly consisting of slams and shockwaves, are predictable due to its size, and it glows yellow right before it attacks. Despite its immense size, the adamantoise doesn't deal extreme damage (as long as the party remains in front of him), so the battle is doable on lower levels. Leaving the arena will force the tortoise back into its shell, requiring a return to Hammerhead to restart.

The adamantoise's unusually massive battle arena can lead to several oddities, such as the visual damage multiplier of warp-strikes reaching up to 8.7x, and attempting to warp-strike the head from behind its front legs may even halt Noctis before he reaches his target. The vastness can also cause allies to constantly teleport or get separated outright, which can lead to mega-items not targeting everyone.

There are a handful of rocks scattered around the front of the tortoise that can be point-warped to. After having lost a chunk of its health, the adamantoise will become vulnerable, resting its head on the ground. If the player inflicts a certain amount of damage to it within a time limit, they'll gain 10 AP. This can occur multiple times. Its attackable targets may also shift. Both its tusks and legs can be broken.

The player can initiate a unique parry animation; the only requirement is using a weapon that can parry (magic and the Cerberus sniper rifle can't). The parry is triggered by standing just to the right or left of the tortoise's head when it lifts its head and slams down. Noctis manifests a royal arm for each party member (Blade of the Mystic for himself, Axe of the Conqueror for Gladiolus, Swords of the Wanderer for Ignis, and the Sword of the Wise for Prompto). They throw their weapons at the adamantoise and warp to the top of Longwythe's Peak. They jump over the edge to attack the adamantoise's head from above.

After patch 1.06 Ring of the Lucii's Death and Alterna work against the adamantoise. If Titan is summoned in this battle, he has a unique animation.

Are we even making a dent in this thing?

Attempting to fight from the side or behind is unwise, particularly when the adamantoise's HP is low, as its shockwaves will send everyone into Danger, and potentially inflict Enfeebled or Confusion. Its tail and hindlegs can only be damaged by Death, Techniques, or the Mutant Rakshasa Blade's warp-strike; even magical attacks will "miss" outright.

The camera can be troublesome when fighting either the head or the legs, and the player may struggle landing attacks on the legs due to the target reticles being surrounded by the massive limbs' invisible walls. AI-controlled party members are unreliable (particularly Noctis, who tends to simply idle without attacking), as they only attack the head, thus settling for ranged attacks.

The adamantoise is weak to greatswords, but their poor DPS and lack of airstepping proves them unreliable, although dishing out warp-strikes towards the head or neck with the Rare Metal can still provide results. The adamantoise's eyes and neck take more damage than its head and legs, but all except the legs being airborne require Noctis to repeatedly warp-strike and airstep when it's not Vulnerable. Fall damage can be negated by initiating a Technique, point-warp, or free-warp before hitting the ground, although taking fall damage can boost the Apocalypse's damage. Point-warping restores Noctis's MP, and thus he can resume warp-striking or airstepping. With few attacks to block, switching to Gladiolus may not be helpful enough. Ignis, on the other hand, can make short work of the beast with his Flamebound daggers and Total Clarity, able to potentially slay it in under 10 minutes by attacking all-out on either of the legs. Prompto can also be used: his rapid-fire machine gun can be used to break the adamantoise, and afterward his bazooka can be used for great effect. The player can switch between party members on the fly and just use their best abilities.

Because of their passive ability causing all attacks to be critical, the Gaze of the Vortex and Plumes of the Vortex excel in this battle when paired with the best Strength-boosting dish and equipment (Adamantoise Meat can be farmed repeatedly here for this purpose). They can also spam warp-strikes and airsteps for prolonged periods. Otherwise, eating Golden Tail Soup or Scientia-Style Sushi before the battle guarantees a 100% critical hit rate (Marrowshroom Chowder also yields this buff, but the two other recipes also yield other buffs; the sushi is especially potent, but only available in the Windows and Royal Edition versions). The Zwill Crossblade remains another good weapon to equip on Ignis for its strength and attack speed. Like greatswords, the Ragnarok's powerful warp-strike is another option.

Techniques cannot target the head, but Ignis's Sagefire and Enhancement may still be useful. Armiger still provides great DPS, but the clipping and camera issues might be troublesome, and Armiger Unleashed's Legacy of the Lucii technique can't be executed. Armiger Unleashed is still otherwise a potent damage dealer when playing as Noctis.

The chance of Alterna hitting is low. The player can simply hold the attack button with the Ring of the Lucii selected as weapon, and the adamantoise will rapidly lose large chunks of health from Death. When about to run out of MP, the player can point-warp and immediately resume. If the player exclusively uses the Death spell, the adamantoise will die at about 85% of its health still left, with a single vulnerable sequence where the player can also collect an easy 10 AP. If using the Death spell, Noctis should maintain a minimum of 500 magic to maximize damage output. Increasing MP won't help, as Death drains a percentage of his total MP. 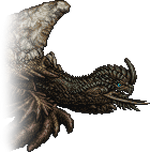 Adamantoise is fought as a boss in Final Fantasy XV event dungeons, usually as a high-level enemy. Its leg and head are separate targets.

Before the game had released, Director Hajime Tabata had mentioned defeating the adamantoise would take 30 in-game days, which would be close to 15 hours in real time.[1] However, in the final game, the fight is much quicker. The adamantoise appeared in the Tokyo Game Show trailer in 2014 where the party marveled at the creature when driving past it. This sequence is not in the final game, and the adamantoise being the Longwythe Peak is not known by the populace.

The group parry against adamantoise is the only time where Noctis's retinue warps in the main game. Ignis warps in Final Fantasy XV: Episode Ignis when empowered for the final boss of his episode.