Multi-directional Attack
List of Adamantoise Enemies
Adamantoise is a genus of enemies in Final Fantasy XI.

Adamantoises are large, turtle-like monsters who are so named for the fact that their shells resemble the hardness and toughness of the adaman metal. These creatures have survived for incredibly long periods of time, thanks to the defensive nature of their shells and their ability to withdraw into it to not only protect themselves, but to heal themselves as well. These large creatures also have several abilities that allow them to weaken their adversaries, further increasing their own survivability.

With only a few adamantoises alive in the wild, they can be hunted mercilessly by adventurers. They are prized for their shell and egg. The shell can be forged by master bonecrafters into an Acheron Shield, which can be wielded by only the most experienced of adventurers. The egg is sought after by Monks far and wide in order to obtain the elusive Black Belt. 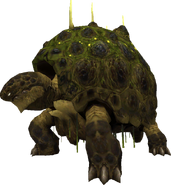 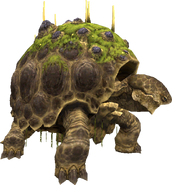 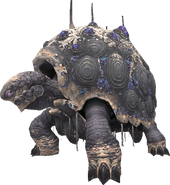 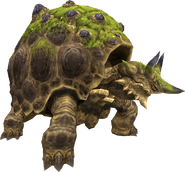 Concept art of the Adamantoise.

One of the species is Genbu. [view · edit · purge]The Black Tortoise or Black Turtle is one of the Four Symbols of the Chinese constellations. Despite its English name, it is usually depicted as a turtle entwined together with a snake. According to Wu Xing, the Taoist five-elemental system, it represents the water-element, the direction north, and the winter season. Thus it is sometimes called the Black Tortoise of the North. It is known as Xuan Wu in Chinese, Hyeonmu in Korean, Genbu in Japanese, and Huyền Vũ in Vietnamese.